The Ishtar Gate, constructed in 575 BC was the main entrance to the city of Babylon, an ancient city in Mesopotamia (Iraq). The gate was made out of thousands of enamelled bricks featuring reliefs of animals and mythical creatures. It was named after the Mesopotamian goddess Ishtar, goddess of war and love.

In 1899 German archaeologists Robert Koldewey and Walter Andrae began to excavate the site of the city of Babylon looking for the Hanging Gardens of Babylon and other famous sites in the city. During the excavation they found the ruins of the Ishtar Gate, and began to collect up the pieces. However, their work was stopped at the outbreak of the First World War, when they had to leave Mesopotamia. The pieces of the gate that they had collected were then sent to Portugal. 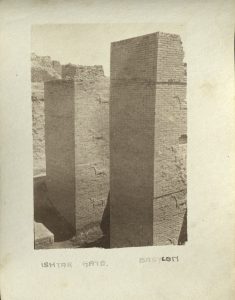 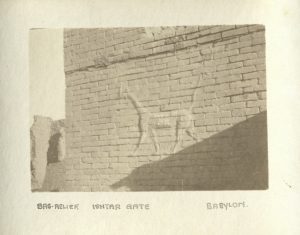 These images of the ruins of the Ishtar Gate were taken during the First World War by Lieutenant Crask. He initially trained with the Seaforth Highlanders, but joined the Machine Gun Corps and was sent to Mesopotamia in 1917. He visited the site of Babylon several times, and as a keen photographer took a number of pictures to send home. These photographs provide a glimpse of how the site looked when excavation was put on hold. After a trip there he wrote home,

“The Colonel was an expert on Babylon and was very interesting. As the light was dull I only took a few snaps, but these I will send on as soon as I can develop them. I hope to go down again next week on patrol, when there is some sunshine.

…the excavators expect to find a building about 40 feet down”

During the 1920s, the collected pieces of the ruin were eventually shipped to Germany, where the process of piecing together the fragments began. Today part of the reconstructed gate can be seen at the Pergamon Museum in Berlin.