As you will no doubt be aware, the business of the Museum has been impacted upon by the current Covid-19 lockdown restrictions. One of the exhibitions we had planned on opening on the 12th of June was to mark the 80th Anniversary of St. Valery-en-Caux. Our volunteer Kenny Grant was leading on this exhibition with our curator and other volunteers. The unveiling of the exhibition has been delayed and will be unveiled once we are able to lift restrictions, we would be delighted to welcome you to visit us and our friends at the West Highland Museum.

In the mean time to mark the 80th Anniversary, Kenny has written the following blog;

In his book, ‘Fo Sgàil A’ Swastika”(“Under the Shadow of the Swastika”)(1), Donald John MacDonald recounts what happened when his Battalion, 4th Queens Own Cameron Highlanders, were told of the decision made by the Commander of the 51st Highland Division, Major General Victor Fortune, to surrender to German forces. In Donald John’s account, the order to ‘ground arms’ was given. In their disbelief at this shocking turn of events, nobody moved. The order was repeated. Any lingering reluctance to obey was quickly dispelled by a burst of German machine-gun fire over the heads of the Highlanders. Estimates vary, but between 8000-10000 troops of the 51st Highland Division became prisoners of war at St Valery-en-Caux, Normandy, on Wednesday 12 June 1940.

None of this would have seemed possible when the 51st landed in Le Havre in January 1940.
The division, part of the British Expeditionary Force (BEF), served initially in the Pas de Calais. However, in April it was placed under the command of the French X (10th ) Army and sent to the Saarland area, which included the Maginot Line. This was intended to give some combat experience against German fighting patrols, which were especially active in that area.

On 10 May, the German offensive in the West began. Against all expectation, German armoured and motorized divisions, simply bypassed the Maginot Line. Within a fortnight they had encircled the BEF around Dunkirk. The 51st HD was cut off from the rest of the BEF. After much indecision in the upper echelons of the French military, the Highlanders were eventually positioned on the south bank of the River Somme. Upon the conclusion of the evacuation of British and French troops from Dunkirk, the 51st readied itself for a renewed German onslaught. On 4 June, the 51st launched an attack on the German bridgehead at Abbeville but suffered heavy casualties and was forced back.

It was clear to General Fortune that he did not have the firepower or manpower to withstand the German offensive. Unfortunately, on 8 June General Weygand, the French commander-in-chief refused General Fortune permission to head for evacuation at Le Havre with all due speed. The 51st was obliged to retreat in tandem with the 31st French Division. The latter could only march 18km daily in the hours of darkness, a pace which enabled General Erwin Rommel’s 5th Panzer Division, 2nd Motorised Division, followed by the 5th and 31st Infantry Divisions, to out flank the Highlanders, and cut off their escape route to Le Havre.

The port of Dieppe to the east had been damaged and was coming under pressure from the eastern pincer of Rommel’s forces. Accordingly, General Fortune was obliged to set his forces in a perimeter square around St Valery.

Set between high cliffs, St Valery was not any easy port from which to mount an evacuation. It became virtually impossible to do so when the Germans broke through onto the high ground to the west of the port on 11 June. Although the Royal Navy had assembled an armada of over 200 small ships for an evacuation, German shellfire prevented them getting anywhere near the port. In a cruel twist of fate, the relative safety of darkness on 11 June was accompanied by fog. Ultimately, around 2000 British and French troops were evacuated in small from the beach at Veules-les-Roses, a small resort to the east of St Valery. However very few of these came from the Highland infantry regiments still defending the St Valery perimeter and town.

At 0800 on 12 June, French forces in the area surrendered. General Fortune faced an impossible situation. His remaining troops had fought to a standstill. He had no means of replenishing exhausted supplies of water, food and ammunition. His Division was severely outnumbered and out gunned. It was surrounded, with no means of escape. He gave the order to surrender at 1000. Later that day, he set off with his men towards 5 years of captivity.

The St Valery campaign has many examples of individual courage, fortitude and humanity, as can be seen from the following:

Captain (Reverend)Duncan MacInnes, chaplain of the 7th Argylls. In the absence of the Regimental Aid Post at Franleu, he took it upon himself to rescue the wounded under heavy fire and care for them in the cellar Franleu Chateau. He insisted that his commanding officer make good his escape by volunteering to remain with the wounded and dying until the Germans came to take them prisoner. He was awarded the Military Cross for his actions.

Company Sergeant Major (CSM) MacDonald, B Company, 4th Camerons, was known as the “muc” in Gàidhlig (or “pig” in English) to his men, because he was such a strict disciplinarian. It was widely believed that he would not hesitate to put his granny on a charge, and the rest of his family too, if necessary. During the attack on Huchenneville, near Abbeville, on 4 June, his company commander, Captain the Viscount Fincastle, was killed. CSM MacDonald retrieved his personal effects, including his pocketbook. From it there fell a photograph of the Viscount, Lady Fincastle and their two-year-old son. As he looked at it, tears were seen to be rolling down the cheeks of this most robust of characters.

Lt John McKillop, (Royal Army Medical Corps), a doctor in the 2nd Seaforths, was badly wounded when the Regimental Aid Post, located in a barn at St Sylvain, near St Valery, was shelled and set on fire. Knowing his wounds were mortal, he nonetheless insisted on continuing to direct operations, with one unconfirmed report suggesting that he did so from a wheelbarrow, moved around by one of his men. He died of his wounds that evening.

2nd Lt Brian Hay, 1st Gordons, was cut off from his battalion on the St Valery perimeter on 11th June. He encountered a confusing situation there, with groups of soldiers, separated from their units, milling around. He took command of the situation and established defensive positions. A French officer, who had previously surrendered to the Germans, came on their behalf and asked Hay to surrender. In the words of Eric Linklater in his book, The Highland Division, Hay gave him his answer, which it would be unseemly to print here: “it was brief, it was loud, it was impolite. ‘Take that to your German General,’ said Hay.” (2)

The nameless Black Watch soldier who scared the wits out of Company Quarter Master Sergeant (CQMS) Gregor MacDonald of the Camerons, then provided a moment of light relief. CQMS MacDonald was leading men of B Company on the retreat from Huchenneville, when he heard a squeaking noise coming towards his group. A moment later a solitary soldier appeared out of the dusk, carrying a pail with a squeaky handle and wearing a balmoral with a red hackle. MacDonald asked what he was doing. “Lookin’ for a muckle great coo tae mulk”, replied the bearer of the rusty bucket. On being told the Germans were in force behind the Camerons, the soldier responded thus: ”OK. There’s anither ferm further back. I’ll try it.” Off he ambled, seemingly without a care in the world.(3)

As we remember the valour and unstinting sacrifice of those who gave their all 80 years ago, it is fitting to ponder on the words of Donald John MacDonald, the Gàidhlig Bard of South Uist, taken prisoner at St Valery as a private in the Camerons.

Na Gillean nach Maireann The Boys That Are No More

NOTE. Maps showing the St Valery campaign can be found on www.51hd.co.uk 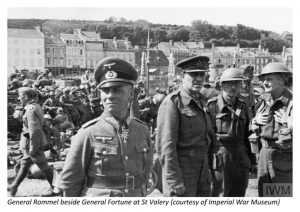