WHAT WAS THE ANGLO-EGYPTIAN WAR?

The British and the French had maintained a strategic interest in Egypt since Napoleon’s first invasion in 1798. Following a defeat in 1807, foreign powers retreated from Egypt. 57 years later, the opening of the Suez Canal, which was controlled by the French and the ruling Khedive, exacerbated Britain’s desire to reinstate its presence in Egypt. In 1875, with Egypt struggling to pay for its huge industrial development, Britain purchased the Khedive’s shares in the Suez Canal, securing the majority share.

In November 1879, Britian and France gained control of Egyptian finances, forming a type of dual colonisation. The loss of sovereignty was felt across Egypt, and in 1882, a revolt was initiated from inside the Egyptian army by an Officer named Ahmed ʻUrabi. And so commenced the ‘Urabi Revolution.

This postcard was sent from Egypt to Scotland in 1882 by Major Norman Guthrie Chalmers, 1st Cameron.

The main goal of the Anglo-Egyptian War was to suppress the ‘Urabi Revolution and restore power to the Khedive, who was compliant with British presence in Egypt. With ‘Urabi Unwilling to negotiate a solution with the colonial powers, Britain sent a fleet of naval ships to the port of Alexandria – the reasons for this are still subject to debate.

On 11th July 1882, the bombardment of Alexandria commenced and lasted for two days. The Battle of Kafr El Dawwar took place on 5th August, and on 13th September, the Battle of Tel-El-Kebir marked the final engagement of the Anglo-Egyptian War. Tel-El-Kebir was described as “a crushing defeat for the Egyptians”. A resounding success for the British, ‘Urabi was exiled and power was restored to the Khedive Tewfik Pasha; following Tel-El-Kebir, the British continued to occupy Egypt until 1936. 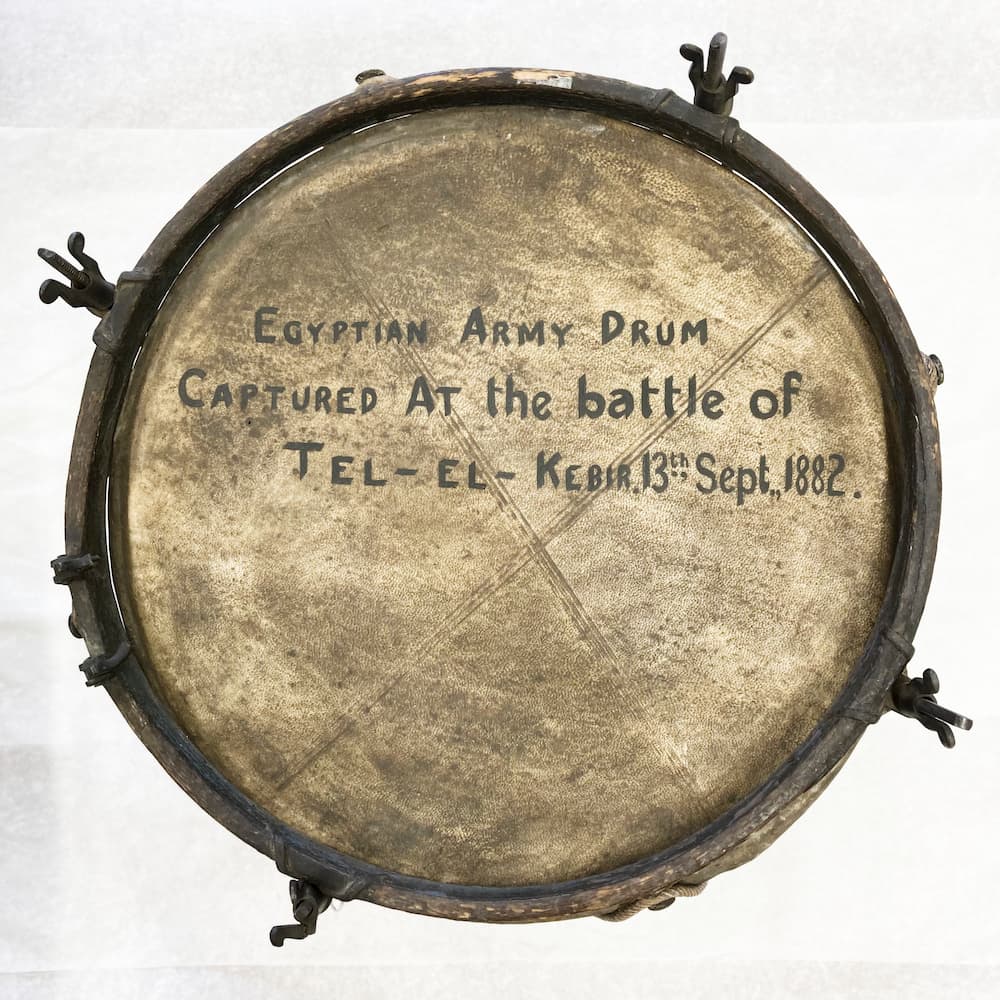 This drum was taken from the Battle of Tel-El-Kebir in 1822, and was used by the Egyptian Army.

THE ANGLO-EGYPTIAN WAR & THE HIGHLANDERS

The 1st Battalion Queen’s Own Cameron Highlanders moved from Gibraltar to Egypt in 1882. The Camerons formed part of the Highland Brigade, and fought under Major General Archibald Alison.

Both regiments were awarded the Egypt 1882 and Tel-El-Kebir Battle Honours. 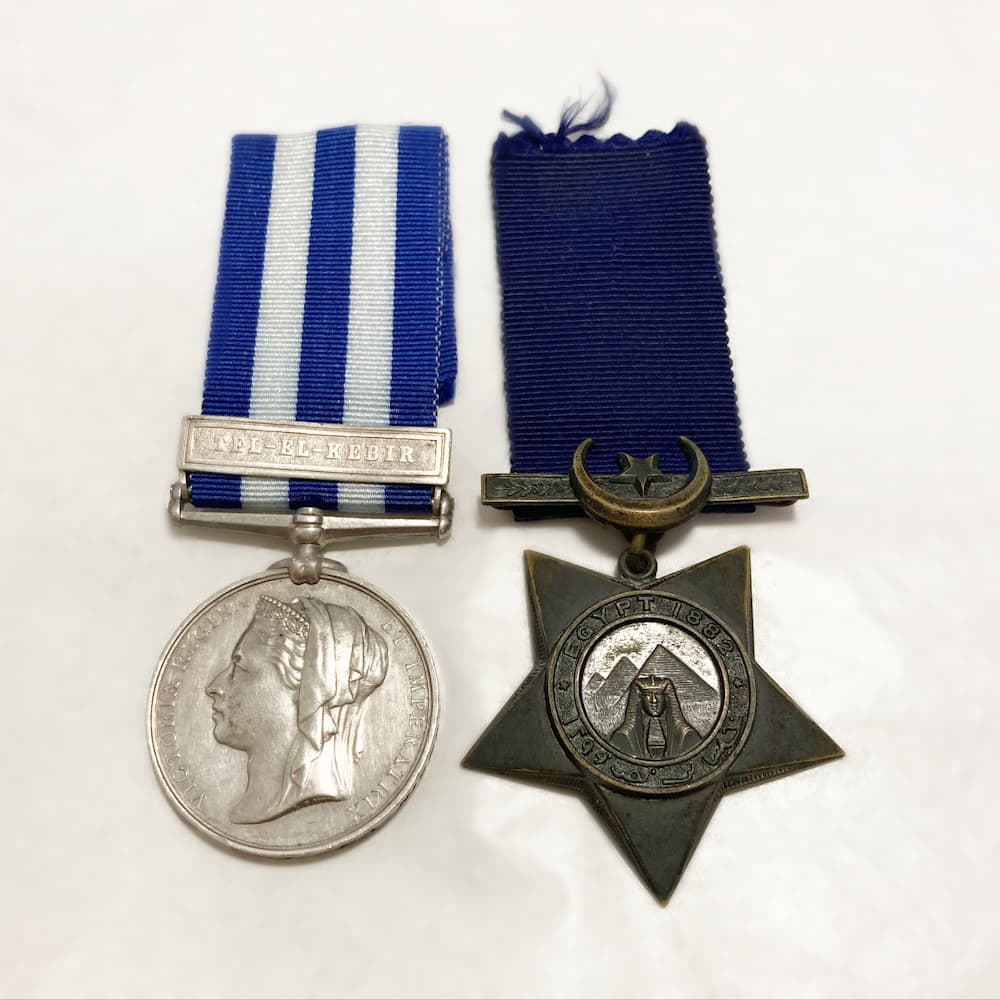 The Egypt Medal 1882 was awarded to British forces who fought in Egypt and Sudan between 1884 and 1889. Relating specifically to the Anglo-Egyptian War of 1882, clasps were issues for Alexandria and Tel-El-Kebir. Recipients were also eligible for the Khedive’s Star that was established by Khedive Tewfik Pasha.

The Anglo-Egyptian War was a resounding military success for Britain, with minimal British casualties and a stronger controlling presence established in Egypt.

The war was unarguably an imperial endeavour, although the boundaries between colonisation and foreign intervention are blurred by the Khedive’s compliance with French and British powers. It was in the Khedive’s financial interest to allow colonial powers to intervene in the ‘Urabi Revolution, despite the probability that victory would increase British presence in Egypt.

Because of his peasant origins, Ahmed ʻUrabi was, and is still, viewed as an authentic voice of the Egyptian people. Like many colonial wars, the conflict was triggered by a dissatisfied military attempting to expel colonial influence. Although the war was a resounding victory for the British military, it is important to consider this wider context that ultimately led to the Anglo-Egyptian War. 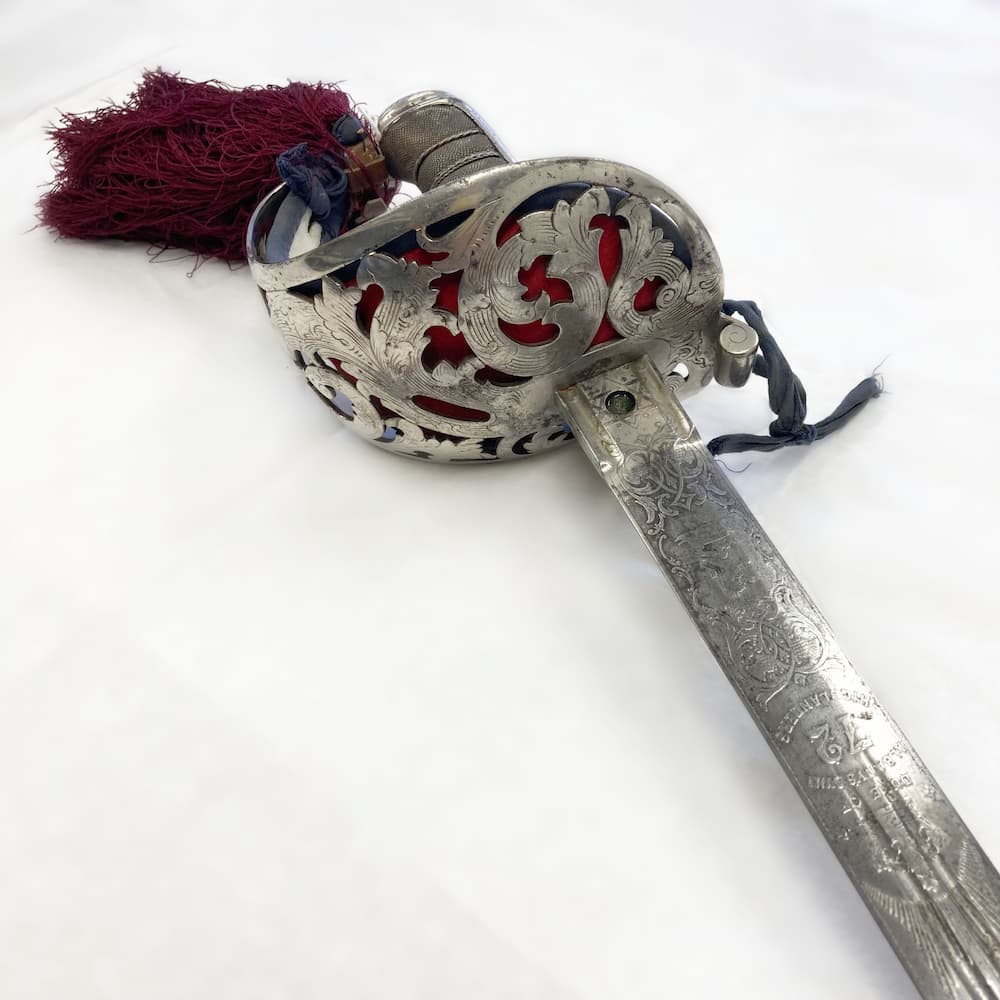