168 years ago, the Crimean War began. The most significant and researched military engagement of the Victorian period, the Crimean War was the result of complex international relations between the UK, Russia, France, Sardinia, and the Ottoman Empire. The war took place on the Crimean Peninsula surrounded by the Black Sea, an area now internationally recognised as part of Ukraine, although ruled de facto by Russia.

The Highland Regiments played a crucial role in securing an allied victory, despite facing brutal conditions and inflated expectations; read on to discover a brief histoy of the Crimean War, and the heroic role of the Highland Brigade.

CAUSES OF THE WAR

As the Ottoman Empire began to lose its international significance, Russia seized the opportunity to expand further into the Middle East. Britain and France interpreted this as a threat to crucial trade routes to India and East Asia. Religious tensions were also at play: the Holy Lands of the Middle East including Jerusalem and Palestine were under Turkish control. These sites were considered sacred to both Orthodox Russians and Turkish Catholics; Russia demanded equal access to these locations, and insisted that Czar Nicholas I be recognised as a protector of all Orthodox Christians throughout the Ottoman Empire. The Sultan refused his demands, and Turkey declared war on Russia.

In the early stages of the war, Russia implemented brutal tactics against the Turks which helped to cement British and French favour against the Russians. The aggressive Russian tactics forced Britain to take protective action over its trade routes, whilst France saw an opportunity to take revenge for Napoleon’s unsuccessful attempt to invade Russia in 1812. France and Britain entered the war, allied with Turkey, in March 1854. 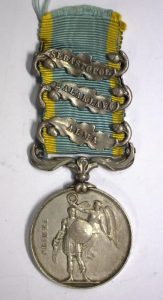 This Crimea Medal with three clasps was awarded to Lieutenant Colonel P Percival of the 79th Camerons.

THE PROGRESSION OF THE WAR

Over 60,000 allied troops arrived in Crimea expecting to make light work of Russia’s military. En route to capture Sevastopol, which was home to a powerful Russian Naval port, the allies faced their first Russian encounter; the Battle of Alma lasted just three hours and forced the Czar’s army to retreat.

A year into the conflict, at the Battle of Balaklava, Field Marshal Sir Colin Campbell famously instructed his men to “die where you stand,” whilst repelling the Russian advance. This victory was quickly overshadowed by the infamous Charge of the Light Brigade (immortalised by Alfred, Lord Tennyson’s poem) that saw the British mistakenly attack a well-equipped, heavily-defended valley of awaiting Russians – 270 out of 670 British soldiers were killed or injured.

The Russians retreated again following the Battle of Inkerman, where 12,000 Russian soldiers lost their lives. The Czar’s army eventually gave out in the summer of 1855; after a final confrontation with the French, the Russians burned their remaining ships in Sevastopol and admitted defeat. The Treaty of Paris was signed in March 1856, bringing an end to a brutal and costly war. 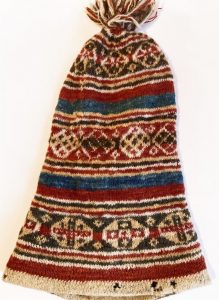 This colourful woollen night cap was worn by a soldier of the 72nd Highlanders during the Crimean War.

The 79th Cameron Highlanders embarked for the Crimea in 1854, joining Campbell’s Highland Brigade in Bulgaria in June 1854; they arrived at Crimea’s Kalamita Bay on the 14th of September 1854. Their first confrontation was the Battle of Alma, after which they worked alongside the allies to take the port Sevastopol – after a year of often disheartening attempts, Sevastopol finally fell on 8th September 1855.

The 79th also contributed to capture of Kertch and Yenikale. Due to extremely harsh conditions and relentless outbreaks of cholera, of the 367 Camerons lost during the Crimean War, only nine died as a result of enemy action. 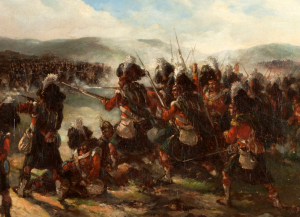 PAINTING OF THE CAMERONS AT ALMA

An oil painting of he 79th Cameron Highlanders at the Battle of Alma, 1854 by an unknown artist.

The 72nd Highlanders (Duke of Albany’s) arrived in Balaklava on 29th May 1855, where they joined the 42nd, 79th, and 93rd Highlanders commanded by Sir Colin Campbell. Stationed in the trenches throughout the Battle of Sevastopol, they served alongside the Sardinians at Kamara.

The collaboration of the Highland regiments, which by the end of the war also included the 71st and 92nd, led to the first formation of the wider Highland Brigade. 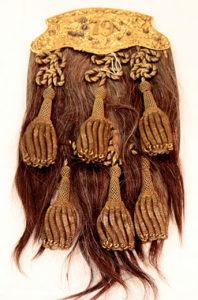 SPORRAN OF A 79TH

This sporran belonged to an Officer of the 79th Highlanders and was worn during the Crimean War in 1855.