A poem from the archive

This month’s poem was written by Private John Smart, of “A” Company 2nd Seaforth Highlanders, in memory of his comrades who fell at Wadi Akarit, in Tunisia, on 6th April 1943. 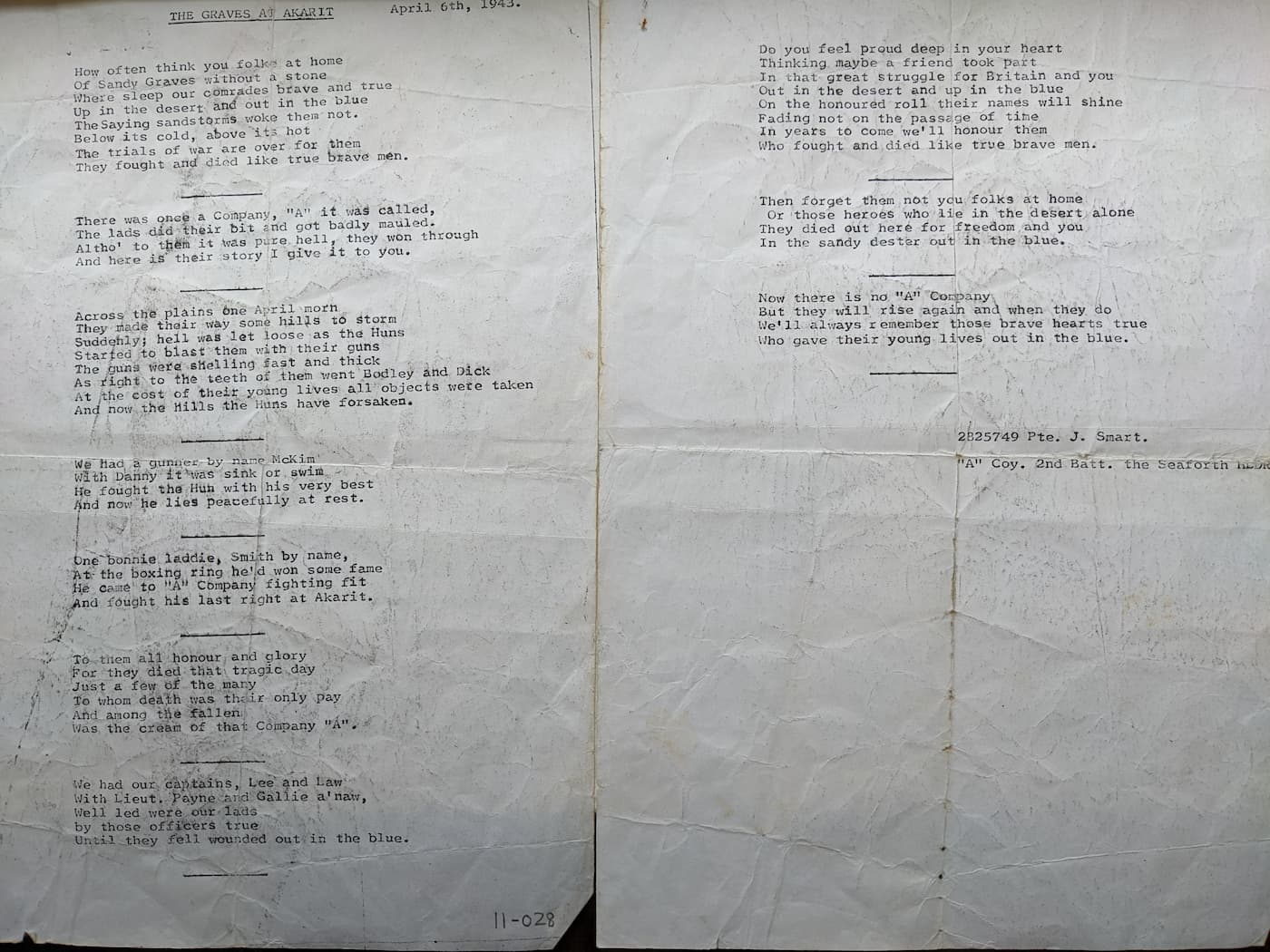 The Battle of Wadi Akarit was the last major engagement of the North Africa campaign of 1940-1943 that was fought along the coastal towns and desert fringes of Egypt, Libya and Tunisia. The 2nd Seaforths made up 152 (Highland) Brigade, part of the 51st Highland Division that was reformed after the earlier loss at St Valery in 1940. In August 1942 the battalion landed in Egypt in time for the 2nd Battle of El Alamein in October/November, later made famous by Churchill’s observation “before Alamein we never had a victory, after Alamein we never had a defeat”.

Soon after El Alamein, the Allies pushed on through Libya, capturing Tripoli in January 1943. They continued to advance into Tunisia and by early April reached a bottleneck where the Germans held strong positions on the Djebel Roumana Ridge, and along the Wadi Akarit which connected it to the sea. When the 51st Highland Division attacked on 6th April, 152 Brigade’s objective was to dislodge the enemy from the Roumana heights. The task of 2nd Seaforth was to follow the 5th Seaforth and 5th Camerons, turn right once astride the ridge and secure the feature at the North-East end of the ridge, referred to as point 112. The 2nd Seaforth war diary takes up the action:

As first light came the battalion was climbing the steep rocky slopes of Roumana Ridge having passed through the HQ elements of 5th Seaforth which were left at the foot of the ridge…. “A” Coy suffered some accurate mortar fire as soon as they arrived at the foot of the ridge and the Company commander, Captain S J S Lee and the company second in command Captain D B Law, were both hit. However, the Adjutant, Captain W.G. McHardy, collected that company and the remainder of “C” Coy which had become separated, and took them along the lower slopes towards the 112 feature.

The right wing “A” Coy and part of “C” Coy under Captain McHardy, had no difficulty in gaining the 112 feature by 0645 hrs, although they arrived on the objective somewhat depleted in strength and ammunition. The Germans were then seen to be approaching up the wadis on the NW side of the ridge and working around the eastern flank of 112. This would not have mattered if the left wing had been able to make good the tops of the ridge overlooking 112. As it was our troops on 112 were under very heavy fire from commanding ground on their left and subject to a counterattack at short range from their front and right. The result was that we lost the feature and suffered heavily in casualties. A few were seen to be taken prisoner, being surprised at very short range. In this attack all Officers and Sergeants of “A” and “C” Coys were wounded. 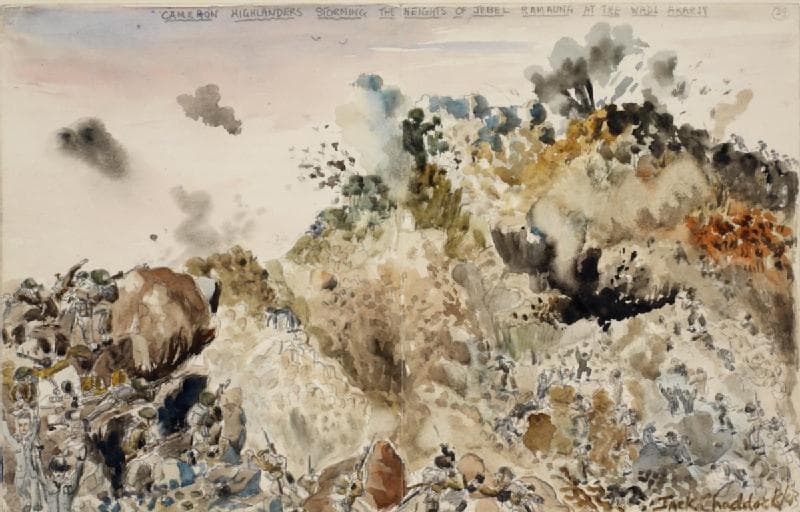 Several attempts to retake Point 112 were made throughout the day but it was decided that it was too costly to try and hold the position and the order was given to withdraw. A fire fight ensued for the remaining hours of the daylight, small parties of each company holding on to what they had gained, but the tops remained in enemy hands. The official report concludes:

The day was full of tragic reverses, and it was extremely disappointing to all that we could not secure the objective. Nevertheless, there is no doubt that the Battalion fought hard and did very well to hold on where it did till dark, and to inflict as many casualties as it did. It is impossible to say how many prisoners were taken, but it was literally hundreds. An immense quantity of enemy weapons, ammunition and equipment was left abandoned on the ground.

By first light 7th April the enemy had evacuated the whole position and the work of clearing the battlefield commenced. A few seriously wounded, which had been in enemy hands all night, were recovered, including Lieutenants Douglas and Payne 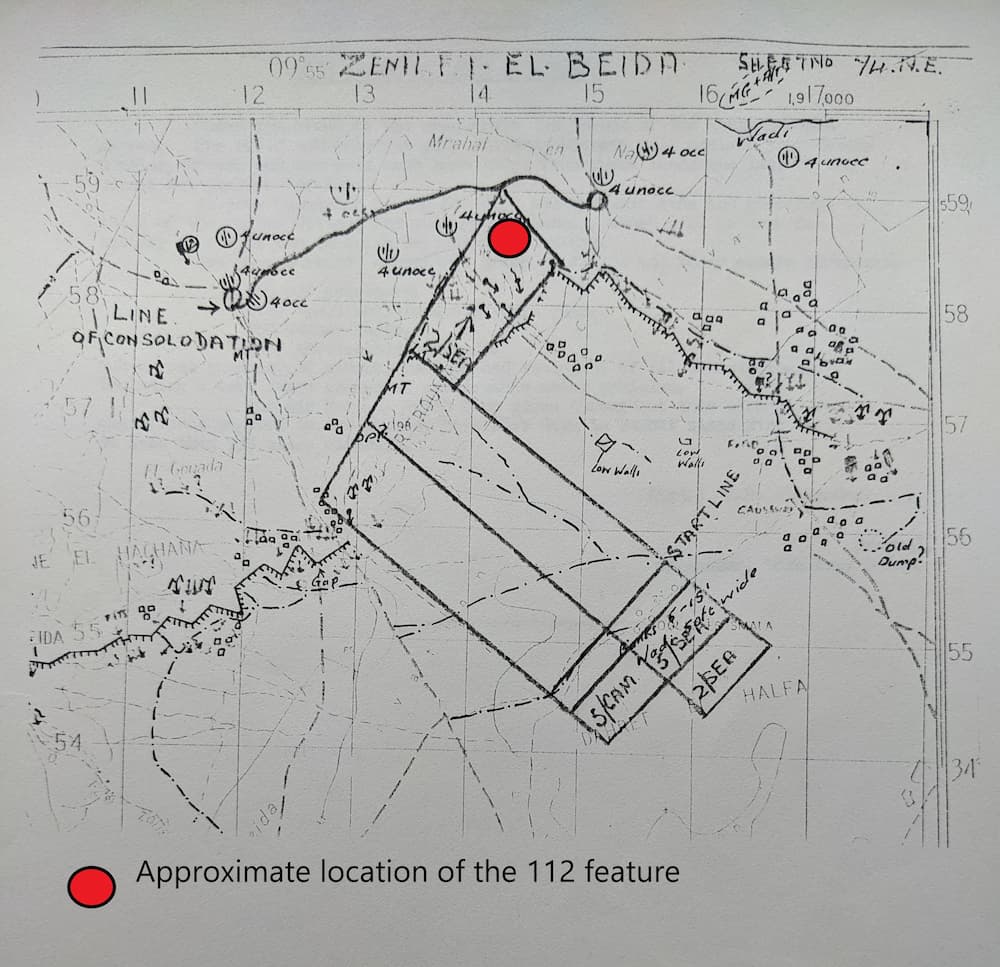 The Battalion lost 52 killed or died of wounds, 123 wounded and 17 missing in this relatively brief action. Due to the number of casualties, it was decided to form the battalion in to two Companies, each 100 strong, “A” and “B” Coys forming one and “C” and “D” forming the other. Two days after the battle a funeral service was held at the foot of Djebel Roumana to bury the dead in the “sandy graves without a stone” of the poem’s title. The following year they were re-located to the War Cemetery at Sfax, where Corporals Eric Bodley and Ebenezer Dick, and Privates Danny McKim and James Smith lie buried today. Captains Lee and Law, and platoon commanders Lieutenants Payne and Gallie, all survived their wounds and the war. Captain Swinton Lee went on to be awarded the Military Cross and bar during 2nd Seaforths subsequent actions in North-western Europe, which included The Netherlands, the Ardennes, Reichswald on the German frontier, and the Rhine crossing. By the end of the war, he had been promoted to Major and joined the 1st Seaforths in Singapore, where he sadly died as the result of a riding accident in December 1947.

Private Smart was killed in Germany on 27th February 1945 and the poem was most likely transcribed from the original copy by a relative after his death. It is a remarkably accurate account of “A” Company’s part in the battle of Wadi Akarit, and a fitting memory to the men who lost their lives there. Read a first-hand account of the battle here.