A Poem for the Battle of Antisirane

This month’s poem commemorates the 6th Seaforths part in a relatively unknown episode from WWII that saw the first use of a combined air, sea and land assault of the war and was a rare example of Allied forces fighting against French colonial troops.

After the fall of France in 1940, the French Government under Marshal Petain assumed administrative control of the unoccupied part of the country to the south, centred around the town of Vichy. Commonly referred to as Vichy France, it maintained a degree of French independence and adopted a policy of armed neutrality with regards to its overseas colonies and protectorates. One of these colonies was Madagascar, a large island country situated 250 miles off the coast of East Africa.

The author of the poem “Antisirane” is somewhat of a mystery. It is attributed to a Lance Corporal Danny Cunningham of 6th Seaforth, apparently killed in action later in May 1942, but there is no record of such a person in the official war records. The Highlanders Museum holds three versions of the poem, all photocopies. One seems to be a copy of the hand written original and is annotated with the names of those killed in action during the assault, but is not signed. Another is a neatly typed copy and the other a hand written copy in a modern notebook. Both of these copies attribute the poem to Cunningham. Some of the lines have been changed in these later versions to make the poem scan better. Whilst each version is accurate in most details, the Seaforth cry of “Cabar Feidh” is spelt differently, and incorrectly, in all three. The typed version incorrectly states that the beach landing took place on 6th May but it reads the best of the three and is reproduced here.

They sailed from home, beyond the sea
To gain a smashing victory
Past Freetown and it’s lovely bay
Past Durban and it’s life so gay
At last to Madagascar’s shore
The lads arrive, hard times before.

On 6th (sic) of May at break of day
The Seaforths land in sheltered bay
They rest awhile then march ahead
No-one could guess where that road led
Up hill down dale twenty weary miles
Yet march they did with gallant smiles
From Heaven’s height that blazing sun
Shone down upon them everyone.

Each Highlander out here a stranger
March to meet their foe and danger
O’er eighteen miles with scarce a stop
The lads trudge on but never drop
A few hours rest then on they go
To action, danger, against their foe.

At eight pm that lovely day
They met their foe, a foe at bay
Machine guns spat, the shells came o’er
They halted there, seconds, no more
Then “Caber Fiedh” (sic) rang through the air
And on they charge with bayonet bare.

Some fell, never to rise again
The rest drive on, avenging men
Soon ‘tis o’er the foe have fled
The ground is littered with their dead
Seaforths and French lay peaceful there
Never again to breathe Earth’s air.

It was a deed of great renown
Theirs is an everlasting crown
So to “Assaye” we add a name
To give the Seaforths further fame
Antisirane charge of glory
Another page in Scotland’s story.

Seaforths who died your fame will live
We who remain our all will give
Your sacrifice was not in vain
We’ll carry on with might and main
To make this world a better place
Where men of every creed and race
Will live as friends and wars will cease
And your sons will live in lasting peace.

In early 1942, the Mediterranean route to India via Suez was too hazardous for most Allied shipping, instead ships were forced to take the much longer route via South Africa and the Cape. The British Government were concerned that Madagascar could fall to the Japanese, thereby threatening British supply routes to India and the Middle East. The campaign to wrest Madagascan control from Vichy France began with Operation Ironclad, a combined air, sea and land assault to take the town of Diego Suarez and its port of Antsiranana (referred to as Antisirane in the poems), located on the shores of a sheltered and well defended bay of the same name at the northern most point of the island.

The task was assigned to Force 121, of which the land forces comprised the 29th Independent Infantry Brigade Group, No 5 Army Commando and the 5th Infantry Division. 6th Seaforth were assigned to 17th Infantry Brigade, one of two Brigades making up the 5th Division. The operation began on 18th March 1942 when 958 officers and men of the Seaforths embarked on the SS Oronsay at Canada Dock, Liverpool. 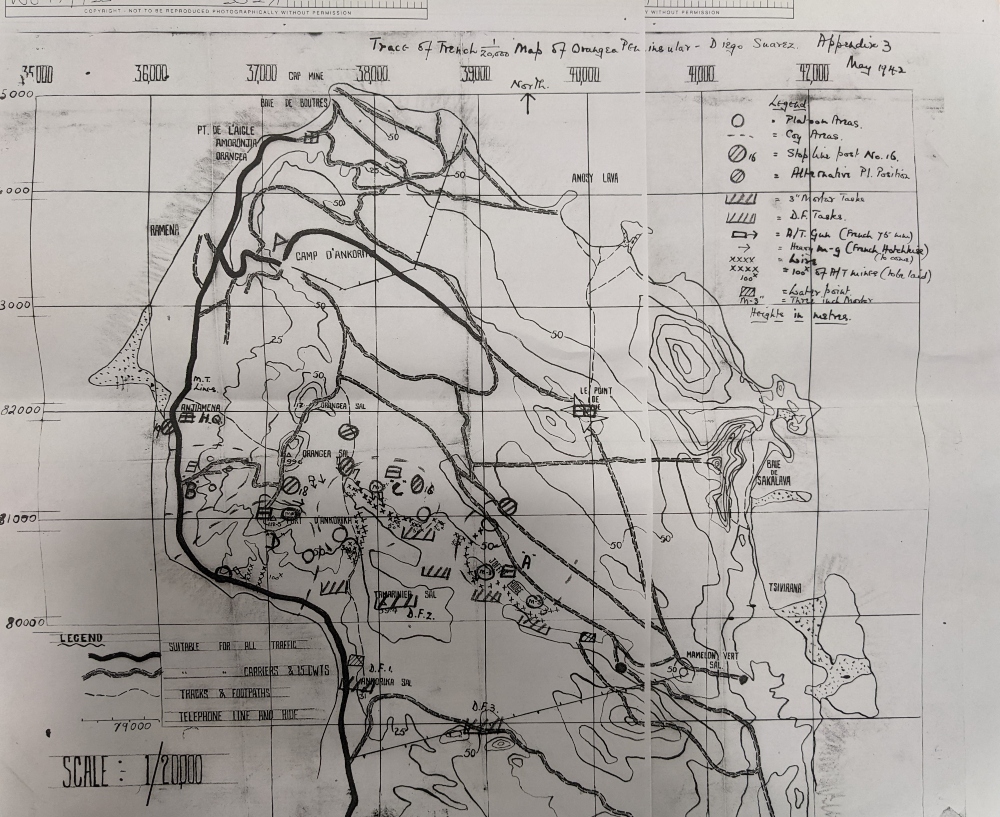 Conditions onboard were crowded and uncomfortable as they sailed down the West coast of Africa, with night time temperatures of 32°C. Information about their destination was restricted to senior officers and the only instruction given to the ranks was to wear boots all day on Wednesdays and Saturdays to harden the feet! Only after leaving Freetown in Sierra Leone were personnel informed that the 17th Infantry Brigade were going to carry out a “combined operation somewhere in the Bay of Bengal”, which was slightly stretching the geographical definition, being over 3000 miles from Madagascar.

Training in ALC (Assault Landing Craft) and instructions on how to pack 48hr rations into a mess tin may have given some clues to the true nature of the operation, as well as the daily route marches during their five-day stopover in South Africa. The Battalion departed Durban on 28th April and the Operation Instructions for Ironclad were finally issued to Company commanders on 30th April. 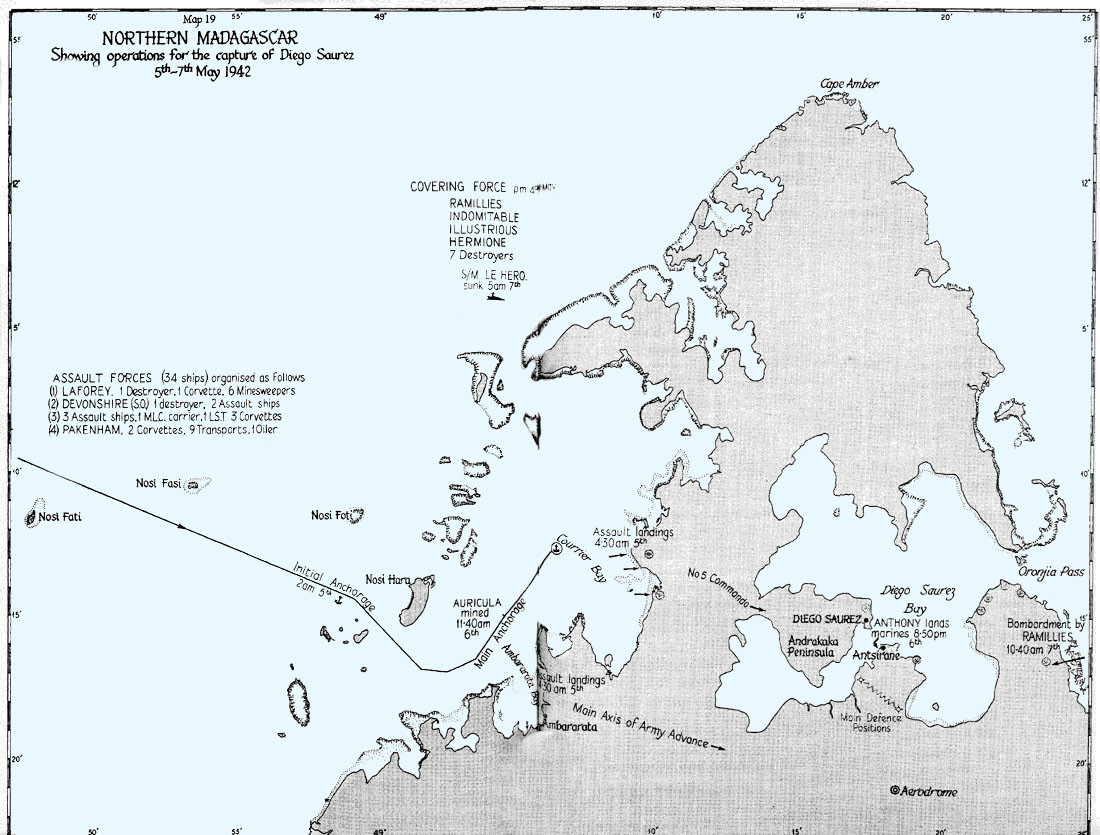 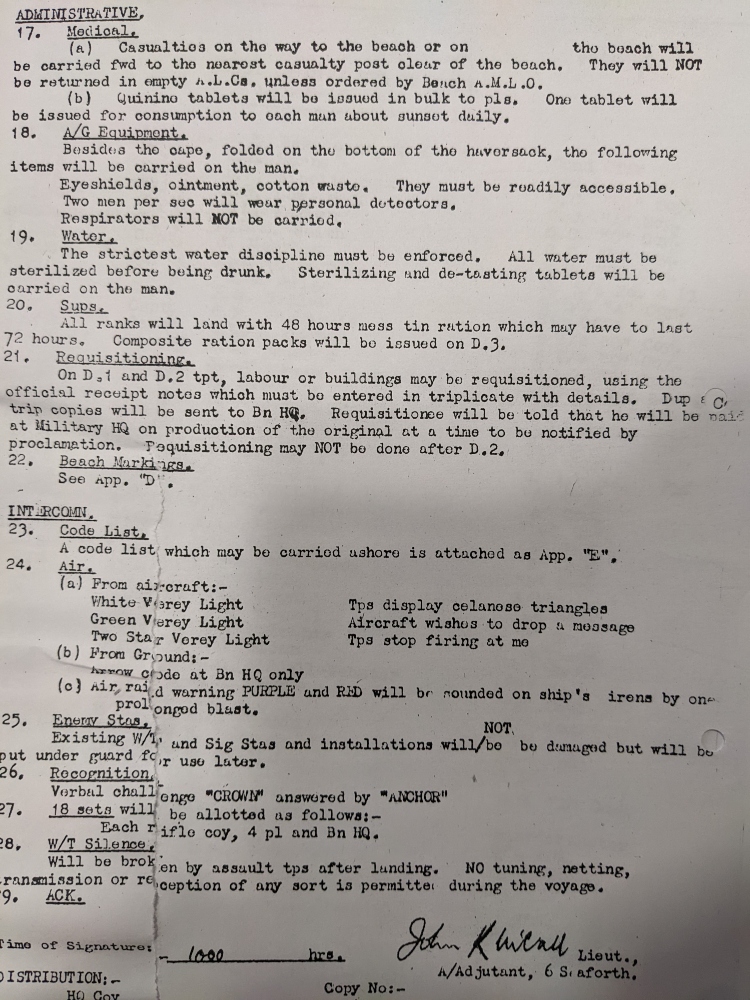 On 5th May a successful and unopposed beach landing was made at Courier Bay, approximately 20 miles from Antisirane. Read the account in the 6th Seaforth War diary here:

“It was decided to make a night attack with 2 Northamptons and 6 Seaforth to capture the chief source of trouble and casualties i.e. a number of pill-boxes and MG (machine gun) posts South & South West of Antisirane and about 2 miles from its outskirts. The CO did a recce in the morning of 6th May from the foremost points of the East Lancashires and 1 RSF (Royal Scots Fusiliers) positions. Enemy observation and sniping of any movement made this recce difficult. In the afternoon CO took Company Commanders to recce as far forward as possible. The CO went to Brigade HQ at 13:15 hrs for orders for the attack. It was timed for 20:00 hrs involving a start from the assembly area at 17:25hrs. The first contingent from the beach came in about 16:30 and they were at once given tea and reorganised.

Zero hour was postponed to allow time for naval co-operation. The attack moved forward at 20:30 hrs with 2nd Northamptons on the right and 6th Seaforths on the left. There was a certain amount of MG fire from the flanks. When the leading wave reached the anti-tank ditch about 150 yds from the enemy positions, a short check was made and the attack then went forward again. It very soon came under heavy enemy fire from pill boxes and MG posts. The leading wave charged the enemy defences and went on to its objective. The success signal was fired at about 21:40 hrs.

Meanwhile the second wave had become somewhat mixed up… Shortly after crossing the anti-tank ditch a loss of direction occurred on the left of the wave. A check was made to rectify it. While this was going on heavy fire was suddenly opened by the enemy from the road pill box and MG posts nearby at very short range. These enemy positions were invisible against the dark background and there was no indication that the enemy were still in occupation of defences already successfully overrun by the first wave. A number of casualties were caused. This occurring at the moment when the line was being sorted out caused some confusion and as a result no immediate assault was made. The wave then reorganised and when the advance was resumed the enemy had cleared out. By this time the supporting Battalions were moving up from the rear and the whole attack went through to its allotted objective. On arrival at the objective the Battalion was disposed with outposts to block the entrances to the southern outskirts of the town”.

Casualties incurred by the Battalion during this night-time assault were 14 killed and 24 wounded. The following day, orders were given that 17 Brigade would proceed to capture the Orange Peninsular to the north of the port, where a heavy artillery battery guarded the bay entrance. All Companies were ready and in position on the start line on 7th May when news was received that the French forces guarding the road into the peninsular had capitulated, and the Brigade paraded in along the road unopposed. One month later the 6th Seaforth re-embarked for India. Whilst this marked the end of their involvement in Madagascar, it took a further five months of fighting before the whole island was under Allied control.