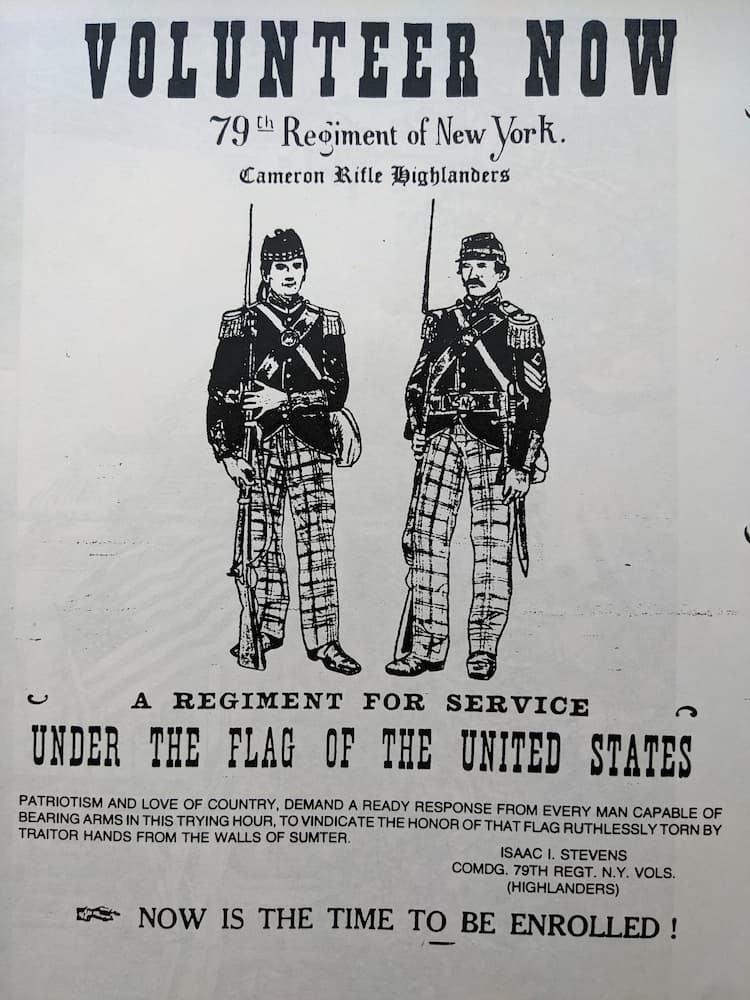 This particular incarnation of the 79th were founded in 1859, as a unit within the New York State Militia composed largely of Scottish emigrants, under the auspices of the Caledonian Society of New York and with the encouragement of the British Consul at the time, a Captain David Cameron. Cameron had been an officer in the 79th Cameron Highlanders and so the new unit not only adopted their Scottish brethren’s regimental number but also full highland parade dress and Cameron tartan trews fatigues.

After the Confederate attack on Fort Sumpter in April 1861, that precipitated the Civil War, the US War Department authorised the formation of the 79th New York Volunteers regiment which was “mustered into the service of the United States for three years May 29, 1861”. Many of the men recruited to the volunteer regiment would have previously been in the 79th militia. 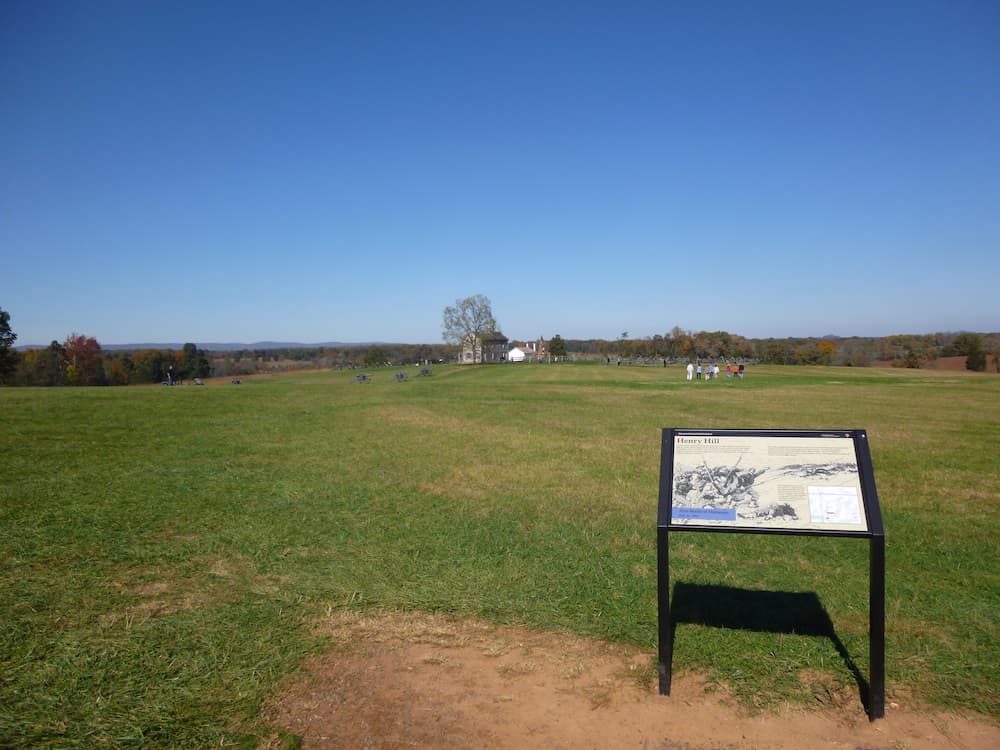 The Charleston Daily Courier reported on 10th June 1861 “The famous Seventy-Ninth, or Highland Regiment of New York, also arrived in Baltimore, and attracted an immense concourse of people to see their denuded extremities and picturesque costume. Some disappointment was felt by the crowd, however, from the fact that only a third of the force was apparelled in Highland style, the remainder wore a blue jacket, trimmed with red facings, pantaloons of a dark plaid, and a fatigue cap of blue cloth.”

They marched out of Washington DC on 16th July in standard Union Army fatigue uniform, with trews, kilts and red trimmed jackets left behind. A Private William Todd, who served with the 79th New York Highlanders and wrote of his experiences in the Century Magazine 25 years later, recollected that “the Captain was the only one who insisted on wearing the kilt on the march, claiming that as Highlanders wore that dress in India it would be quite as comfortable in Virginia; but while chasing a pig the day before we reached Centreville the kilt was the cause of his drawing upon himself the ridicule of the whole regiment. When we started for the battlefield on that Sunday morning he, also, appeared in ordinary blue uniform”. 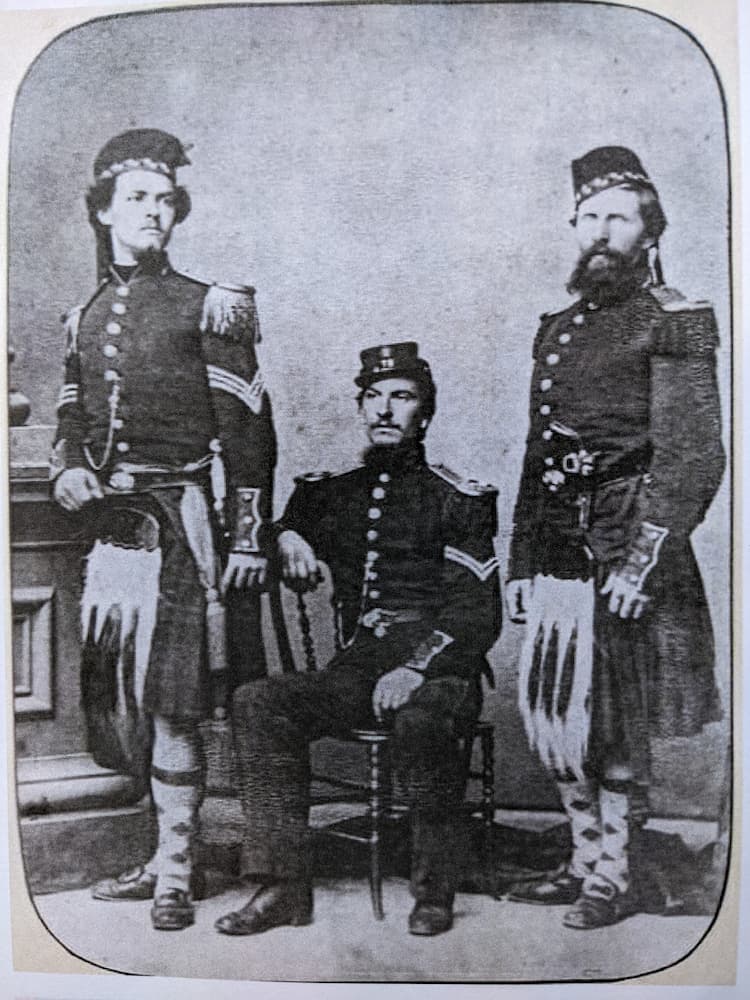 The Confederate Army of the Potomac under General PTG Beauregard were gathering around Manassas Junction, approximately 25 miles south-west of Washington DC, then as now the US capital. The Union Army had been camped around the capital since early July and were ordered to advance south towards the newly designated Confederate capital at Richmond, Virginia. On Sunday 21st July 1861, battle lines were drawn across either side of the small river separating the two armies: Bull Run

In command of the Union army, General Irvin McDowell’s plan was to mount a diversionary attack across the stone bridge at the centre whilst the bulk of his troops forded the river upstream to attack the Confederate weaker left flank. Unfortunately, delays in mobilising the flanking attack gave the Confederates ample time to reinforce the high ground protecting their flank, Henry House Hill. 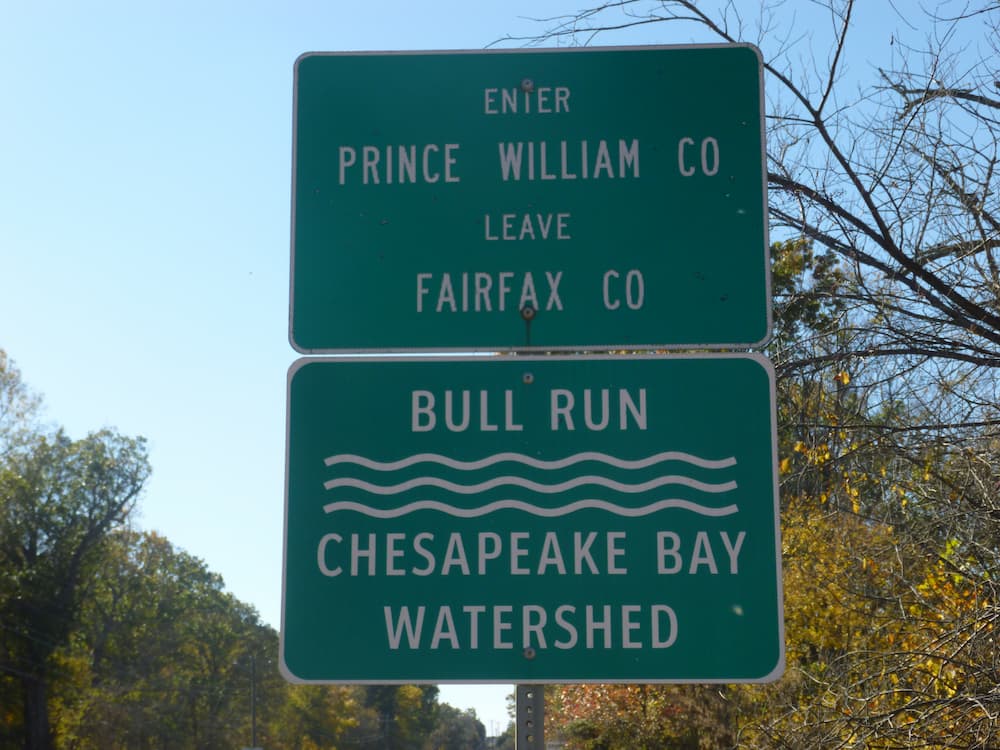 Colonel William Sherman lead his 3rd Brigade, which included the 79th, across Bull Run at a small ford just upstream of the stone bridge. Following orders, he committed his regiments piecemeal to the Henry Hill attack. He first sent the 2nd Wisconsin who, still wearing their militia grey uniforms, were shot to pieces by both sides. When they were eventually driven back, the 79th were ordered forward. Led by their colonel, James Cameron, they charged three times but never came near to capturing the hill. The Confederates rallied under General Thomas Jackson’s Virginia Brigade, later to be known as “Stonewall Jackson” after General Barnard Bee’s later famous exclamation to his troops “There is Jackson standing like a stone wall. Let us determine to die here, and we will conquer. Rally behind the Virginians.”

After suffering unsustainable losses the Union Army turned and fled back across Bull Run and returned to Washington, defeated. By the end of the battle, the 79th had 198 killed, wounded and missing, including the commander Col. James Cameron being mortally wounded.

The Battle of Bull Run, or Battle of First Manassas as the Confederates later named it, quickly dispelled any romantic notions on either side that the war could be won easily or without much loss. The 79th were so shocked by the experience that some officers resigned their commissions and many rank and file were granted disability discharges from sympathetic medical officers. The remaining troops, on learning that they were to remain in the field and not, as intimated, return to New York for garrison duties, briefly refused to obey orders. The mutiny was only put down after their new commander, Colonel Isaac Stevens, requested the support of Regular US Army troops to arrest the ringleaders and march the rest of the 79th back to camp. 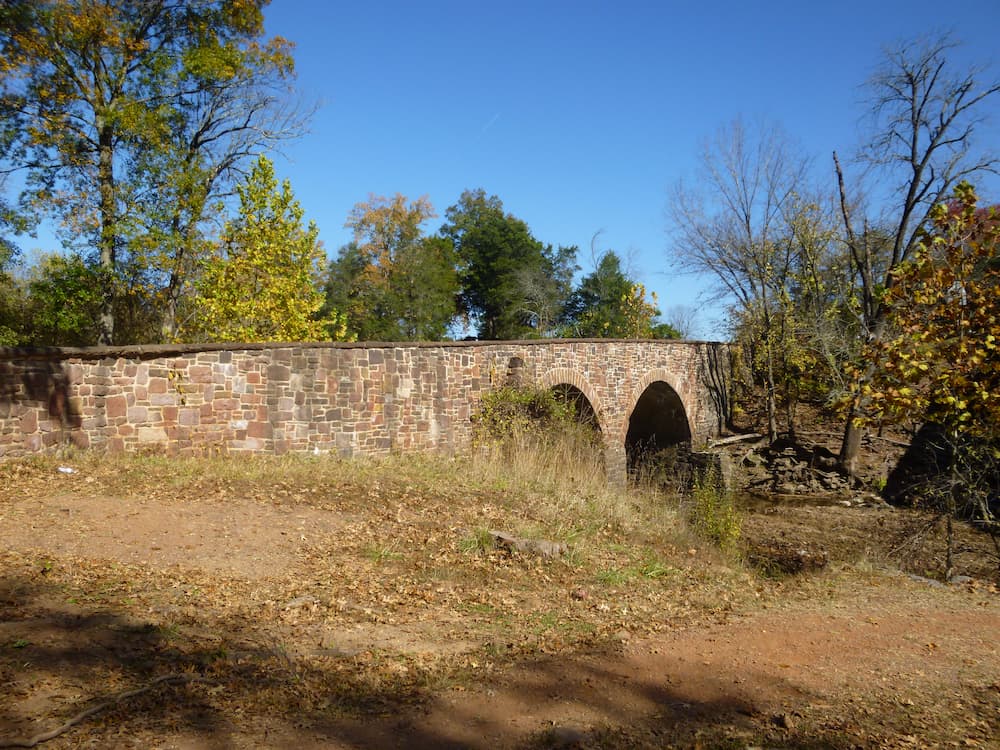 After that brief blemish to their reputation, the 79th acquitted themselves well at the battles of Seccessionville, Chantilly and Antietam in 1862, and the attack on Fort Sanders in 1863. Their last action was at Spotsylvania on 9th May 1864 and the Regiment was disbanded after the allotted three-year service, on their return to New York on 18th May 1864.

Despite popular myth, the 79th New York Highlanders never wore kilts during the Civil War or marched to the pipes and drums. But as we wish our American readers and visitors a happy 4th July, it is nice to learn that the 79th Highlanders reputation so enhanced by victories at Waterloo, Alma and Lucknow was carried across the Atlantic to become an intriguing footnote in the history of the US Civil War.