A poem from the Archvie

This month’s poem was written during one of the less well known and at the time quite politically sensitive campaigns in Seaforth Highlander’s history: the Malayan Emergency of 1948 – 1960. The period immediately after World War II saw growing calls for independence in countries colonised by the old European powers, not least because having thwarted the Imperial plans of Italy, Germany and Japan, it was difficult to defend a return to the status quo of the pre-war British, Dutch and French colonies. Britain decided to adopt a policy of orderly disengagement, by transferring power through peaceful, democratic means whilst countering the growing threat of Communist influence emanating from the Soviet Union and China.

Having spent most of World War II in India and Burma (now Myanmar), in October 1946 the 1st Battalion Seaforth Highlanders moved to Ipoh in Malaya (now Malaysia) and then to Singapore. Not long after their arrival the Malayan National Liberation Army, the military wing of the Malayan Communist Party, began attacking plantations and other infrastructure in an attempt to force independence. After three British plantation managers were murdered by the MNLA in June 1948, the British declared a State of Emergency and enacted legislation to counter the growing insurgency.

The so-called Emergency developed in to a classic cat-and-mouse guerrilla conflict, with the MNLA using makeshift bases and hideouts deep in the Malayan jungle to launch attacks against plantations, tin mines, Government buildings and police outposts. The Communists received food and logistical support from the minority indigenous Chinese, whilst the British were supported by the ethnic Malays on the understanding that independence would be granted as soon as the security situation was stable. 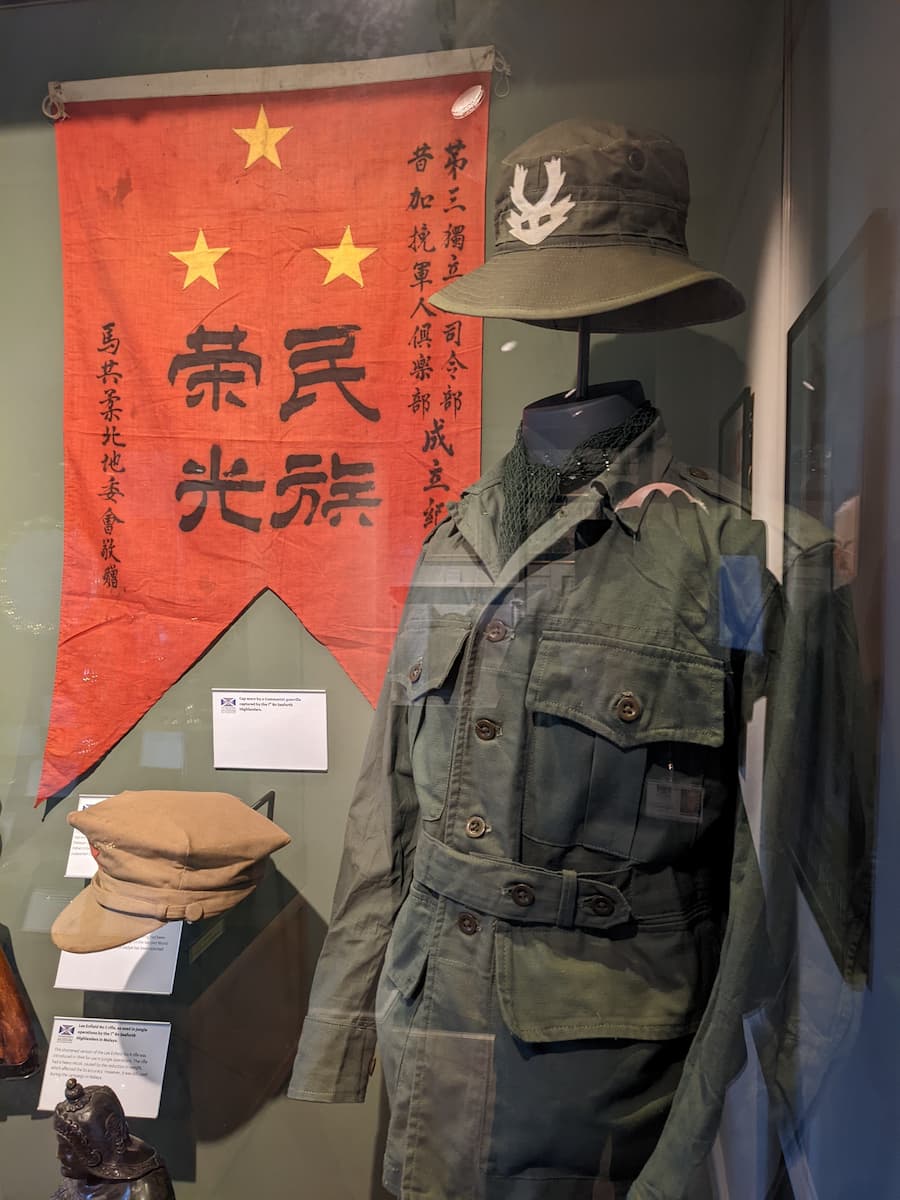 The 1st Seaforths were well placed to confront such an enemy, having trained and fought extensively in the jungles of Assam and Burma during the war. The key tactic was to assign each Company a patrol area, within which they set up a so-called Firm Base from which to mount search and destroy patrols. Lightly armed and without much air support, they spent three periods ‘up country’ engaged in jungle operations between June 1948 and May 1951.

The first period of operations was the most demanding, with intensive patrolling, much of it based on unreliable information and all too often having to react to ‘bandit’ incidents rather than take the initiative. Writing at the time, Colonel H Mackay summed it up well “What 1st Seaforth achieved was literally holding the ring, at a stage when almost single-handed, and by sheer hard work, patrolling day after day with great determination and success, it kept the country, and its administration, business life and communications going”.

After two months Rest and Refit at Selarang Barracks in Singapore, the Battalion returned to the jungle in September 1949. It was during this second period that one of the most reported incidents the campaign occurred. On the 12th November 1949, B Company and the Carrier platoon set out to establish a new forward base. The proposed location turned out to have an inadequate water supply, so a recce party set out to find a more suitable spot. The party came across one of the largest MNLA camps yet discovered, and in the ensuing firefight the Commanding Officer, Major W.M.Campbell along with Lieutenants J.N.Hoare MC and M.I.Anderson, and Lance Corporal G.Mackay were killed. Lt. Anderson was the only son of the then Governor of Gibraltar, so the incident was widely reported in the press, and a Regimental Court of Enquiry was set up to establish how such a high number of officers had been killed. 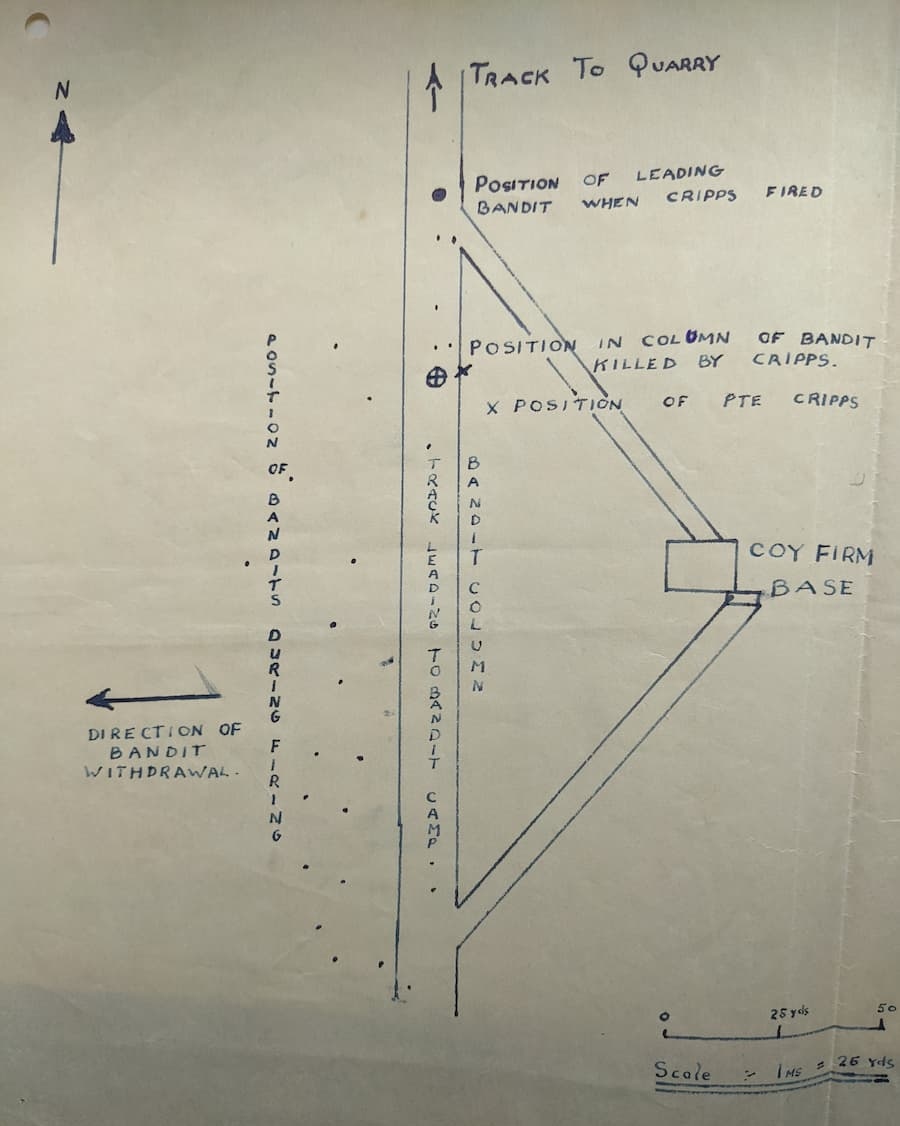 After a second Rest and Refit break in Singapore between May and June 1950, the battalion commenced the third and final tour up-country in July. They didn’t have too long to wait before their

next fatal engagement with the enemy. On 28th August, 6 Platoon B Company commanded by 2nd Lieutenant Keith MacIntyre encountered a brand new MNLA camp in an old rubber plantation, occupied by around 30 heavily armed men. In the ensuing battle, Lt. MacIntyre was mortally wounded and Private David Frew killed outright. Fortunately, 5 Platoon was also operating in the area and having heard the fire arrived quickly on the scene, charged the camp and forcing the enemy to withdraw.

In May 1951 the Battalion handed over their area to the Gordon Highlanders and on 28th May a severely depleted strength of 25 Officers, 116 Other Ranks and a 35 strong military band departed Singapore for Southampton aboard the troopship HT Empire Fowey. The Malaysian Federation gained independence in August 1957, but the State of Emergency dragged on for a further three years, until the Malaysian Government finally declared it over on 31st July 1960.

He sees the blue of Scotland’s hills
Between the bouts of fevers, chills
That wrack his body bullet-torn
Each pain a searching, twisting thorn
He sees again his mother’s hair
His father in the worn arm chair
He’s with them in the friendly room
Away from jungle’s verdant gloom

And now he’s out upon the hill
Around him larks and linners trill
Love songs to all who came to hear:
How sweet upon the exile’s ear!
A well loved form he sees appear
A form at once both dim and clear
She smiles to him with tender charm
The jungle now can do no harm

His arms reach out, his palsied hands,
To touch her hair, the vagrant strands
That smooth the furrows from his brow:
No fear or pain can touch him now
His comrades find him lying there,
A pale, wan face in matted hair;
But on his face no care worn crease:
The wounded boy has found God’s peace 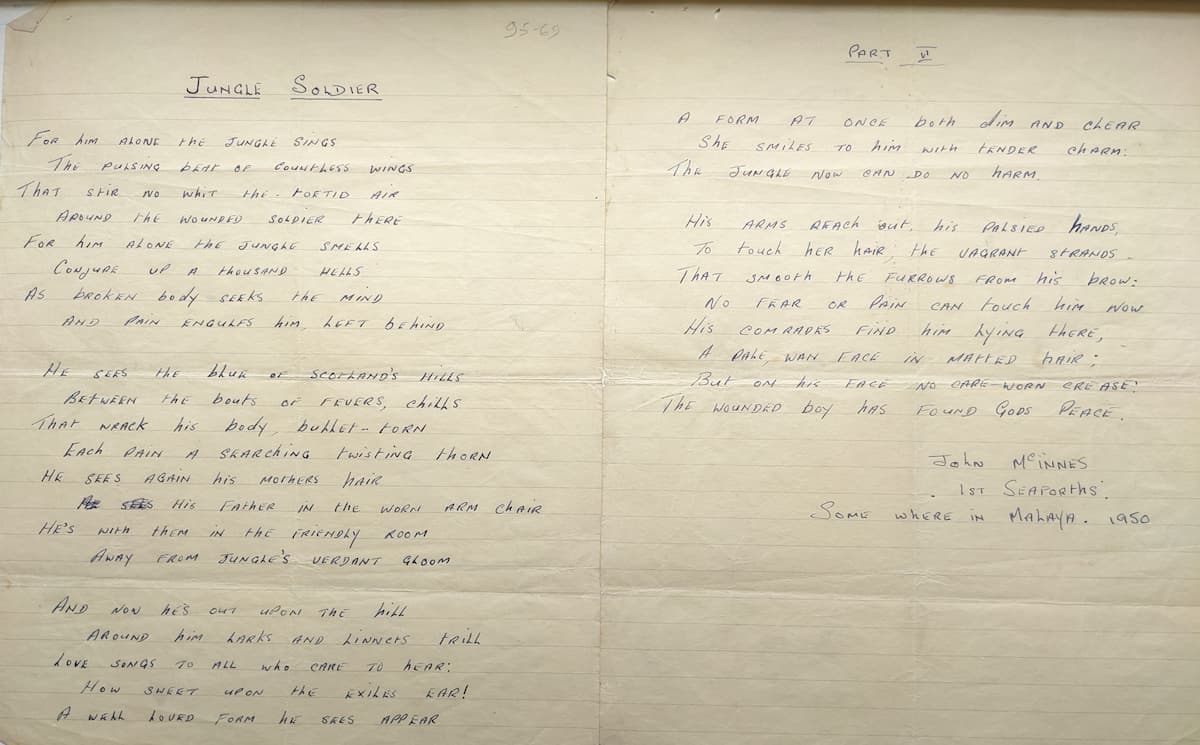 The poem came into the museum’s possession by a roundabout route and it has been difficult to verify exactly who the author was. An accompanying letter from a L.W.Glover of Wymondham, Norfolk, dated April 1995, states that the poem was given to him “by one of the Seaforths when I had to spend a couple of days in their company during the Troubles in Malaya – I was at the time serving with the RAF who I transferred in to after the war, in which I served with the Kings Own Royal Regiment in Burma”. There is no record of a L.W.Glover in the Kings Own Royals but there is a Leslie Walter Glover who enlisted in the RAF between February 1948 and October 1949, so perhaps that is him.

There is a handwritten and a typed copy of the poem, both on the thin, utility note paper of the time. John McInnes does not appear in the Roll of Seaforth Officers, Warrant Officers or NCO’s who served during the Malaya Emergency so he was almost certainly in the ranks. Despite a detailed search through the regimental journal ‘Cabar Feidh’, John McInnes is not mentioned by name in the Malaya operational reports. Unfortunately, as a result of National Service and the so-called Python leave (the code name for leave that was given to troops that had done four years or more abroad and were due for home posting), there was very high turnover of all ranks during the five years that the 1st Seaforths were in Malaya and there is no comprehensive list of all the men who served there. So John McInnes remains something of a mystery, as does the identity of the young soldier lying at peace in the jungle with ‘pale, wan face in matted hair’.