At the Grave of Tom Louttit: The Battle of Meggido

A Poem from the Archive

This month’s poem honours Private Thomas Louttit, 1st Seaforth Highlanders, who died of wounds received at the Battle of Megiddo fought between 19th and 25th September 1918, when British Empire forces broke through the Ottoman front line across the Judean Hills north of Jerusalem, in what was to be the final offensive of the Sinai and Palestine campaign of WWI.

The Battalion had landed in Egypt in early 1918 as part of the 19th Brigade, 7th Indian (Meerut) Division, having spent the previous two years in Mesopotamia (now Iraq). After two months rest and refit in Ismailia, on the western bank of the Suez canal, the Division joined General Allenby’s XXI Corps in Palestine.

The 1st Seaforth war diary notes that on 16th September the Battalion bivouacked in an orange grove in the vicinity of Sheikh Muannis, in order that they might be concealed from enemy aircraft. They remained there two days and on the night of the 17th moved to the vicinity of Cromarty Hill and made ready for the start of the attack on 19th September.

The Brigade were formed into two columns, each column on a frontage one battalion wide. The initial attack by the 28th and the 92nd Punjabis, under cover of the creeping barrage, was completely successful. The second attack on the Et Tire defensive line, by the 1st Seaforth’s and 125th Napier’s Rifles, met with more opposition but was eventually successful. It was during this attack that Private Louttit was fatally wounded. 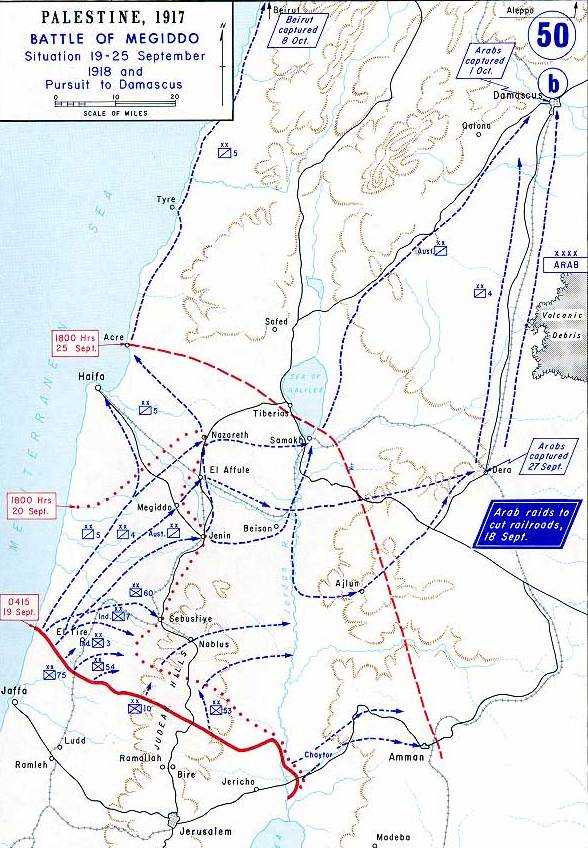 The next day the Division marched 34 miles through difficult country and without any water beyond what could be carried by the men in their bottles. At the end of the march the enemy’s position at Beit Lid was taken and a great many prisoners captured, but the Battalion suffered heavy casualties.

This was the 1st Seaforth’s last battle of the War. Shortly afterwards the Battalion marched north to Beirut, where hostilities ended with the signing of the Armistice of Mudros on 30th October 1918, 12 days before the more widely celebrated armistice on the Western Front. They remained in Beirut until March 1919 when they proceeded to Alexandria and in June embarked for Fort George, and home.

The Battle of Megiddo achieved decisive results at comparatively little cost, in contrast to most offensives on the Western Front. General Allenby, C-in-C Egyptian Expeditionary Force, achieved this through the use of creeping barrages to cover infantry attacks and then used his mobile forces of cavalry, armoured cars and aircraft to encircle the enemy positions, cutting off their lines of retreat. Megiddo in Northern Israel is believed to be the ancient city of Armageddon referenced in the bible and it is no coincidence that Allenby named the battle after this place. It is the first recorded use of combined infantry, artillery, armour and air support, perfected in the Nazi ‘Blitzkrieg’ 20 years later, so his naming of the battle was eerily prescient, as is the ‘red terrored holocaust’ referenced in the poem. 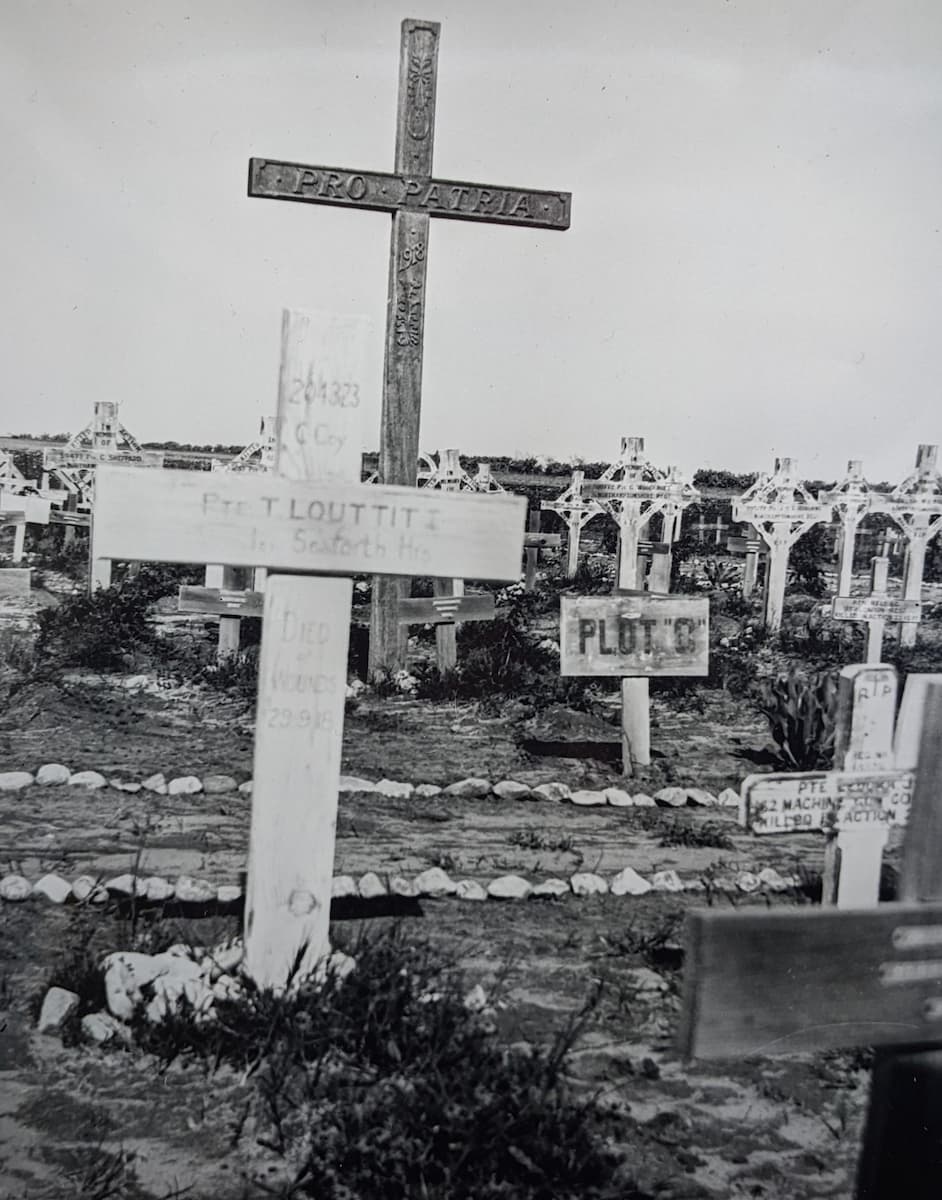 At the Grave of Tom Louttit

I knew him for an all brief spell, a soft voiced Highland boy.

My mind his face, and form retains, nor will it ever cloy.

I see him as I knew him then, and time flies back apace,

To that red terrored holocaust, that smote the human race.

A great true-hearted boy he was, and free from any guile,

As honest as the day was long, with friendship in his smile.

The boy was in his actions, though he had manhood’s frame,

In fun and frolic he was first, and ripe for any game.

As privates in a regiment, of martial pride and fame,

We shared our common bivouac, and marched till we were lame.

The hot red sun above us, full many a weary day,

With the dust clouds hanging o’er us along the column’s way.

We fought and watched and thirsted, and suffering hunger’s woes,

We buried our dead comrades, silent victims of our foes.

We helped repair the shattered trench, a never ceasing toil,

We rested in the orange groves, the luscious fruit enjoyed,

And pleasures of an ocean bath, our hard tried spirits buoyed.

Such times always passed speedily, and back again we went,

But massing troops this time foretold, attack was our intent.

A few brief days, and it was launched, which ended our suspense,

We crept out through the spiteful wire, our hearts and muscles tense.

And as the morning broke the sky, the zero whistles blew,

And up we sprang exultantly, a yelling cursing grew.

We cleared their lines in record time, all shambled up with dead,

And wounded groaning horribly, as onwards we sped.

But not without sad loss, for many a face we missed,

And he before the sun was high, was added to the list.

In marching and the sudden fight, and deadly nightly chills.

Then several weeks of tramping upon and endless trail,

Until at length we reached our goal, an end to our travail.

And now the news of Armistice came out upon the air,

And then I knew that he was dead, and joy was marred by care.

I heard that he was buried close to where we used to lie,

Near a village named Wilhelma, with our old line hard by.

He rested there a while, till later borne by hands of love,

Across the Plain of Sharon, on which Judah’s hosts oft strove,

To Ramleh where crusaders bold, their old-time stronghold reared,

Which now by time’s strange freak of fate, by Moslems is revered.

And there when some four years had passed, I chanced to find his grave

Where serried rows of crosses stand, above the sleeping brave.

All ringed around with Cypress and the Eucalyptus tree,

His earthly body now at rest, his youthful spirit free.

Willian Jamfrey was born in Worksop, England, on 6th June 1898 and served in the Seaforths from 1916 to 1919. He then joined the Royal Irish Constabulary before moving to the Palestine Gendarmerie in 1922, when he was moved to write this poem on seeing the grave of his young comrade. Sometime later in the 1920’s he emigrated to the United States and moved to California, where he died aged 96 on 11th April 1995.

Ramleh cemetery dates from November 1917, when Ramleh (now Ramla) was occupied by the 1st Australian Light Horse Brigade. Field Ambulances, and later Casualty Clearing Stations, were posted at Ramleh and Lydda from December 1917 onwards. The cemetery was begun by the medical units, but some graves were brought in later from the battlefields and from Latron, Sarona and Wilhema Military and Indian Cemeteries. Ramleh holds the graves of 3300 men from WWI, one of the largest number outside France and Belgium.