Armistice Day, later to become Remembrance Sunday, is observed in the UK and many other countries on 11th November or the nearest Sunday to it to mark the ceasefire brokered between the Allied and German armies on the Western Front on 11th November 1918.

Not surprisingly, Remembrance Sunday focuses on the military lives lost and the terrible price paid, on all sides, in fighting war. But what happens to the civilians caught up in the conflict, and how do the military help bring back some semblance of order once the fighting stops? 2022 marks the 40th anniversary of the Falklands War which took place between April and June of that year. After 10 weeks of fighting, the British task force successfully retook the islands from the Argentinians. The Queens Own Highlanders were twice placed on standby to mobilise but were stood down when the fighting ended on 14th June. Less than a month later the order was reversed and the Battalion was sent to the South Atlantic not to fight a war, but to help build the peace and rebuild the shattered lives of the Falkland Islanders.

On 5th July the battalion flew from Brize Norton to Ascension Island via a short smoke stop in Daker and boarded the requisitioned North Sea ferry MV Norland. Three days later the MV Norland weighed anchor and set course for Port Stanley, arriving on 20th July. As the Norland edged through the narrows into Port Stanley, the battalion lined the decks for their first view of the Falklands and the aftermath of the war, brought into sharp focus by the sight of the RFA ship Sir Tristram lying damaged and blackened from the effects of an Argentine 500lb bomb one month earlier.

On landing in Port Stanley, the battalion was dispersed, A Coy to Goose Green, B Coy to North Arm, D Coy to Fox Bay whilst S and HQ Coy remained in Stanley. One of the immediate tasks was to safely remove the vast amounts of ordnance left behind, and to assist the sappers in mine clearance. The hazards of this were made all too aware on 31st July when two QOH soldiers, Privates Marr and Catto, were injured when their vehicle backed over a mine. 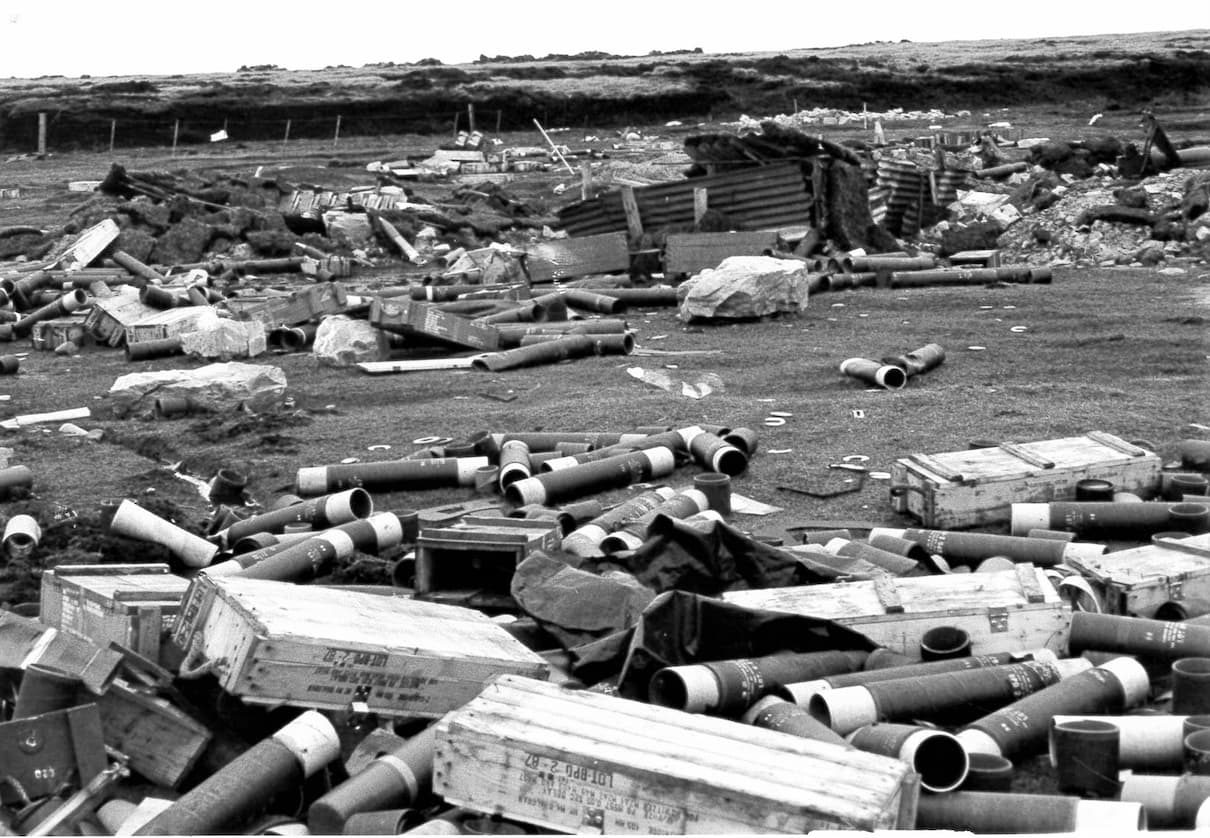 In a wry nod the the TV programme Not the Nine O’Clock News airing in the UK at the time, the Battalion published a newsletter Not the Highland News during their stay on the islands, copies of which are held in the Highlanders Museum archives. A thoughtful summary of their work on the Falklands was printed in the edition published on 12th August 1982, under the headline “Cleaning up Stanley”:

“Our first view of Stanley, the capital, from the Norland, reminded us all of a Highland fishing village: white cottages with coloured rooves glinting in the sunlight with the snow encrusted peaks in the distance. Only the roar of the stags was missing.

However, we were all shocked by our first walk through the town. The roads were covered in mud, the drains blocked. Litter of all sorts (and most especially the ever-lasting beer can) was lying all over the place. Fences had been smashed or cut giving the town an insecure feeling. Grass had been turned into mud.

Argentinian equipment was in evidence wherever we looked. One of their brand new Pumas lay beside the main road, smashed and looted by the victorious army. In all there were some six Argentine helicopters including a Chinook and some Hueys in a similar state.

The civilians, it seemed, could not comprehend their new existence. The military surrounded them. In the air the clatter of countless helicopters buzzing from ship to shore, airfield to ship, and shore to the countryside often made conversation difficult. At sea the harbour was full of ships; a hospital ship, the Noland, the Ragatira, the Endurance and countless other tugs and landing craft made Port Stanley a yachter’s nightmare. In the town the normal peaceful roadways were choked full with every type of vehicle both captured Argentinian and British rushing around in some kind of mad frenzy. Gangs of soldiers, sailors and airmen made the pavements their own.

The General (Maj Gen David Thorne CBE) merely told the Commanding Officer to ‘sort out Stanley’. S Coy has taken the brunt of the task with help from HQ Coy’s individual talents.

The children’s playground has been renovated by the QMSI and his gang. The fence surrounding it has been mended and re-painted. He has created swings, roundabouts, a small obstacle course and a mini football pitch. The kids are delighted with it.

S Coy has cleaned up Argentinian operating theatres, the destroyed butcher’s shop on the St Tristram and has formed burial fatigues for the Argentinian dead. They have filled in trenches and bunkers which were all over the town: almost every garden has a trench or bunker in it. This task is not yet complete.

Government House has almost been restored to its former glory.

The traffic has been controlled and the Jocks good turnout, discipline and attitude has been greatly admired. Discipline in the town has improved drastically.

Signposts have been painted, fences mended, drains unblocked and 20 years of rubbish removed” 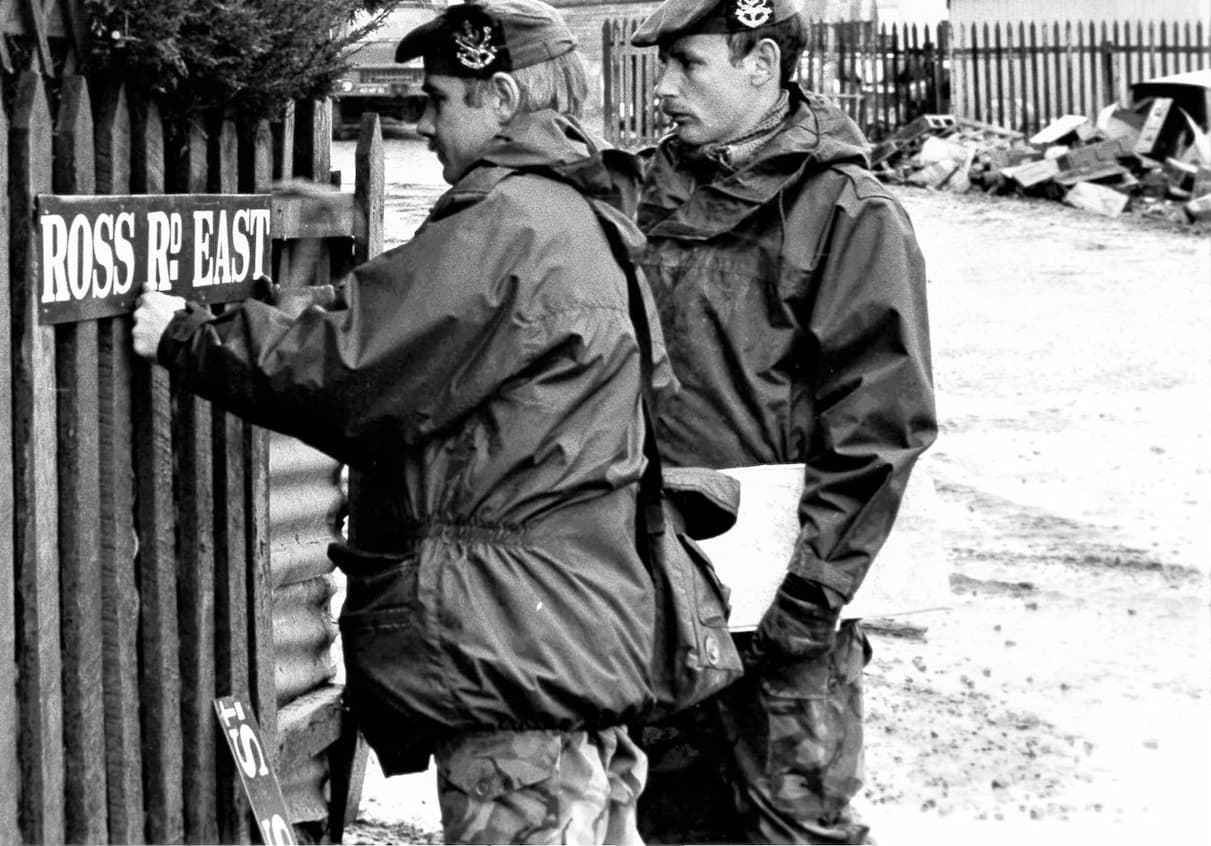 The impact of these relatively simple but effective measures had an immediate impact, as evidenced by a letter from the Civil Comissioner, Rex Hunt, to the Battalion’s CO, Colonel Ridley sent less than three weeks after the Battalion’s arrival:

A belated but nonetheless heartfelt thanks to the men of the Queens Own Highlanders for mounting the guard of honour at the opening of the Legislation Council and also for their sterling work in clearing up Government House and, indeed, the whole of Stanley.

Many people have remarked to me how much better the town is looking and this is mainly due to the efforts of your Battalion. 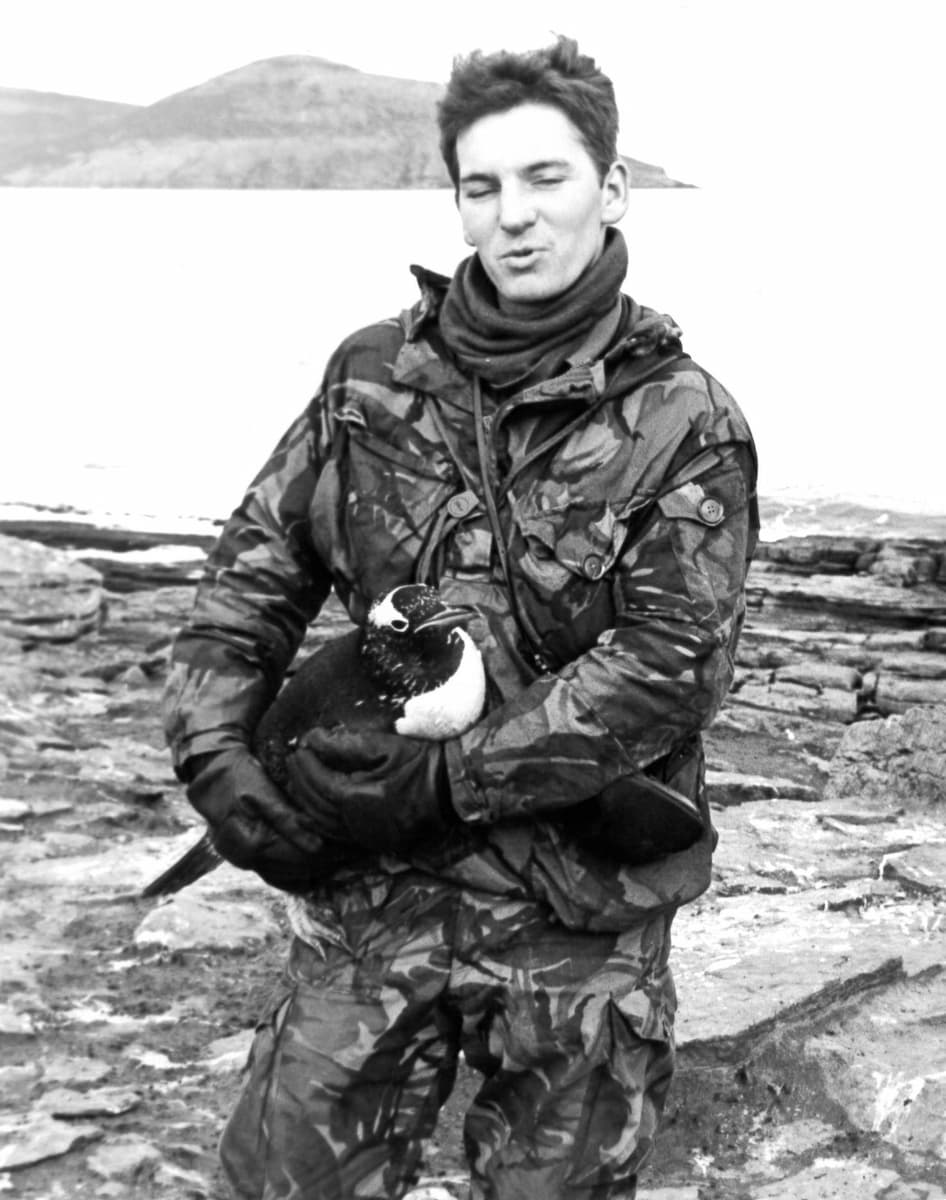 After a five-month tour, the battalion returned to the UK on 11th December 1982. So this year as we remember the lives lost during WWI, WWII and the many smaller conflicts since, it is also worth

remembering the lives rebuilt on the Falkland Islands 40 years ago and recall the message sent by Colonel Ridley to the Commander British Forces, at the end of the Queens Own Highlanders tour:

“From all ranks 1QO HLDRS and A Coy 1QLR personal for CBF. Job 10 verse 12 and 13 Highland version ‘Thou hast granted us life and steadfast love, and thy care has preserved our spirit. We know this was thy purpose. Good exercise! Caber Feidh”.

To which the Commander sent the following reply:

“For all ranks 1QOHLDRS and A Coy 1QLR from CBF (Commander British Forces): Thank you so much for your message. I shall not forget. Indeed it was my purpose, and what a magnificent response. God speed”.