Every Picture Tells a Story

Every picture tells a story and in this blog we have uncovered some of the tales behind eight Christmas cards selected from The Highlanders’ Museum archive. According to the Greeting Card Association, the first Christmas cards were sent in 1843 by civil servant and entrepreneur Sir Henry Cole. Finding he was too busy to send his customary Christmas letters to all his friends and acquaintances, he commissioned the artist John Callcott Horsley to design a card for him to send instead. Sir Henry had a thousand cards engraved and hand coloured, sending half of these to his friends and selling the remainder for a shilling each. The idea caught on and sending cards soon became as much a part of Christmas as turkey and plum pudding.

In the Army, different Regiments started producing their own cards for the officers and men to post home to family and friends and in the archives we have over 50 examples from late Victorian through to the last ever card produced by Queen’s Own Cameron Highlanders before the amalgamation with the Seaforths in 1961.

The oldest example is a set of six cards, one for each of the Highland regiments that remained after the Cardwell reforms of 1881. On the reverse of each card is a brief history of the regiment, which would have helped the reader link the new names to the old regimental numbering system. The cards were probably meant to be sent as a set, and the quality of the printing suggests that it would have been intended to keep as a souvenir, not just for Christmas. This particular set is marked “To Dear old Dad, Wi a’ Guid Wishes for the New Year, from John” and is dated 1890. 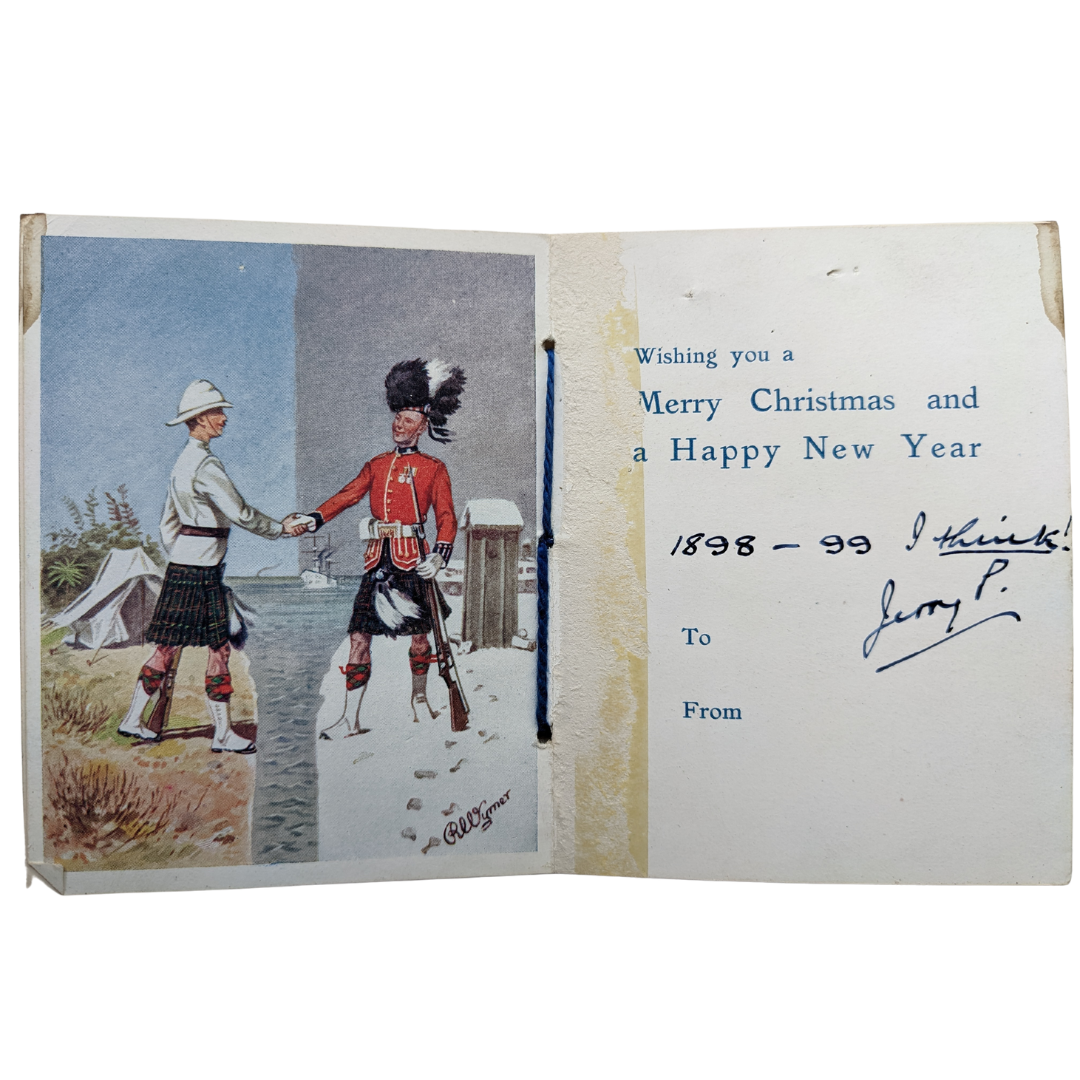 Many of the cards juxtapose a scene from home and abroad, in this example from the late 19th Century shows two Cameron soldiers on guard duty, one in the tropics and the other in a more wintery location, shaking hands across an ocean divide. On the back of the card are printed the rousing words “I hear the pibroch sounding deep o’er the mountains and the glen, whilst light springing footsteps are trampling the heath ‘tis the march of the Cameron men”.

In December 1898 the 1st Camerons were in Cairo and the 2nd Camerons, who had only been formed at Fort George the previous year, were in Aldershot, so perhaps the intent was to promote a feeling of kinship between the old battalion and the new. The slightly cryptic inscription “1898-99 I think! Jerry P”, suggests that the card was sent some years after it was first produced. 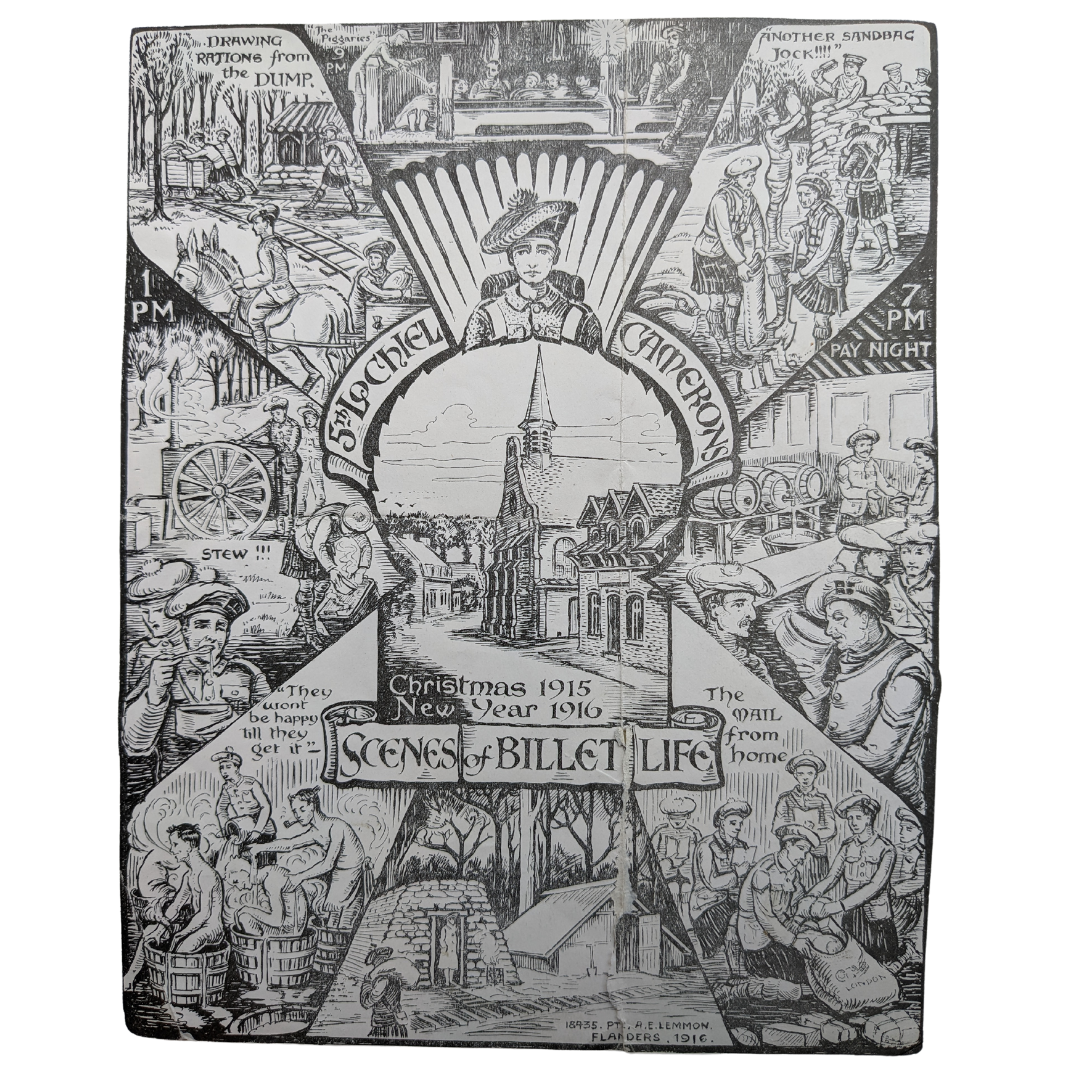 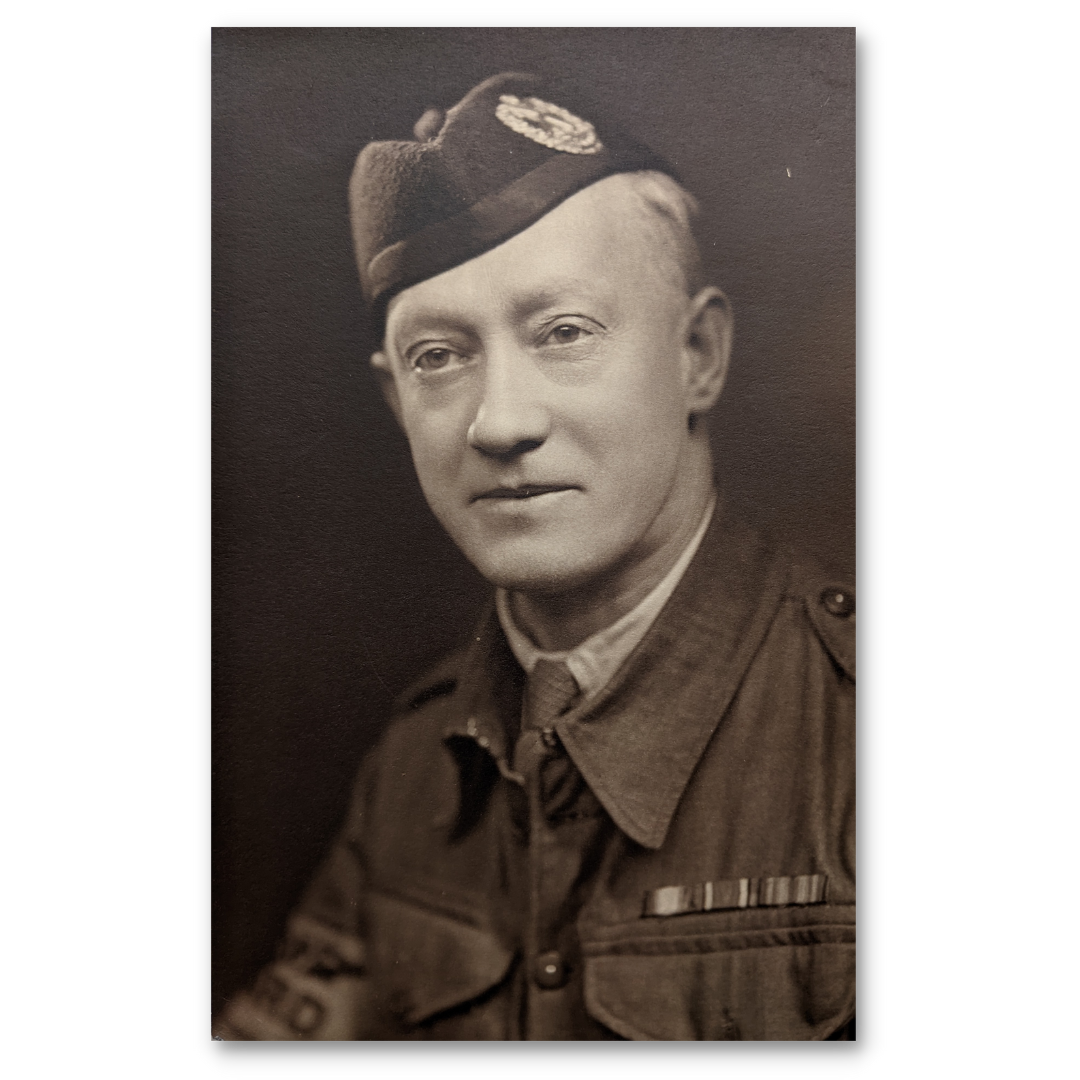 Not surprisingly cards from the WWI and WWII periods are by far the most numerous held in the collection. As the number of battalions multiplied during the war years, so did the range of cards, with each battalion often having its own design.

During WWI the 5th (Lochiels’) Camerons were fortunate to have 18435 Private A E Lemmon amongst their ranks. Albert Edward Lemmon (1889 – 1963) had trained at the Birmingham School of Art and then worked with the A J Davies stained glass studio at the Bromsgrove Guild before joining up. His remarkable drawing “Scenes of Billet Life” adorned the 5th Camerons Christmas and New Year card for 1915/16. Given that the 5th Camerons had been decimated at the Battle of Loos only three months before, the scenes depicting the men going about their duties are remarkably relaxed. The drawing is in the style of a stained glass window and it is not surprising that after the war Lemmon set up his own studio in Bromsgrove where as well as stained glass he produced painted reredos, candlesticks and other ecclesiastical items. A good example of his work can be found in St Peter’s Church, Bromsgrove Catholic church of St Peter, Worcestershire.

The Birmingham Mail made particular mention of the drawings in their report on the School of Art’s annual exhibition in March 1919: “Though modest in proportions, what may be termed the war section will attract attention. Of the drawings the most striking is a series by Albert E Lemmon, who was studying stained-glass window painting when he joined up, in the form of a Christmas souvenir of the ‘Queen’s Own’ Cameron Highlanders. In these pictures, each of which is story in itself, one can read the recent history of the regiment, depicted with a degree of minute detail which is not less remarkable than the general originality of the designs and the excellence of their execution”. 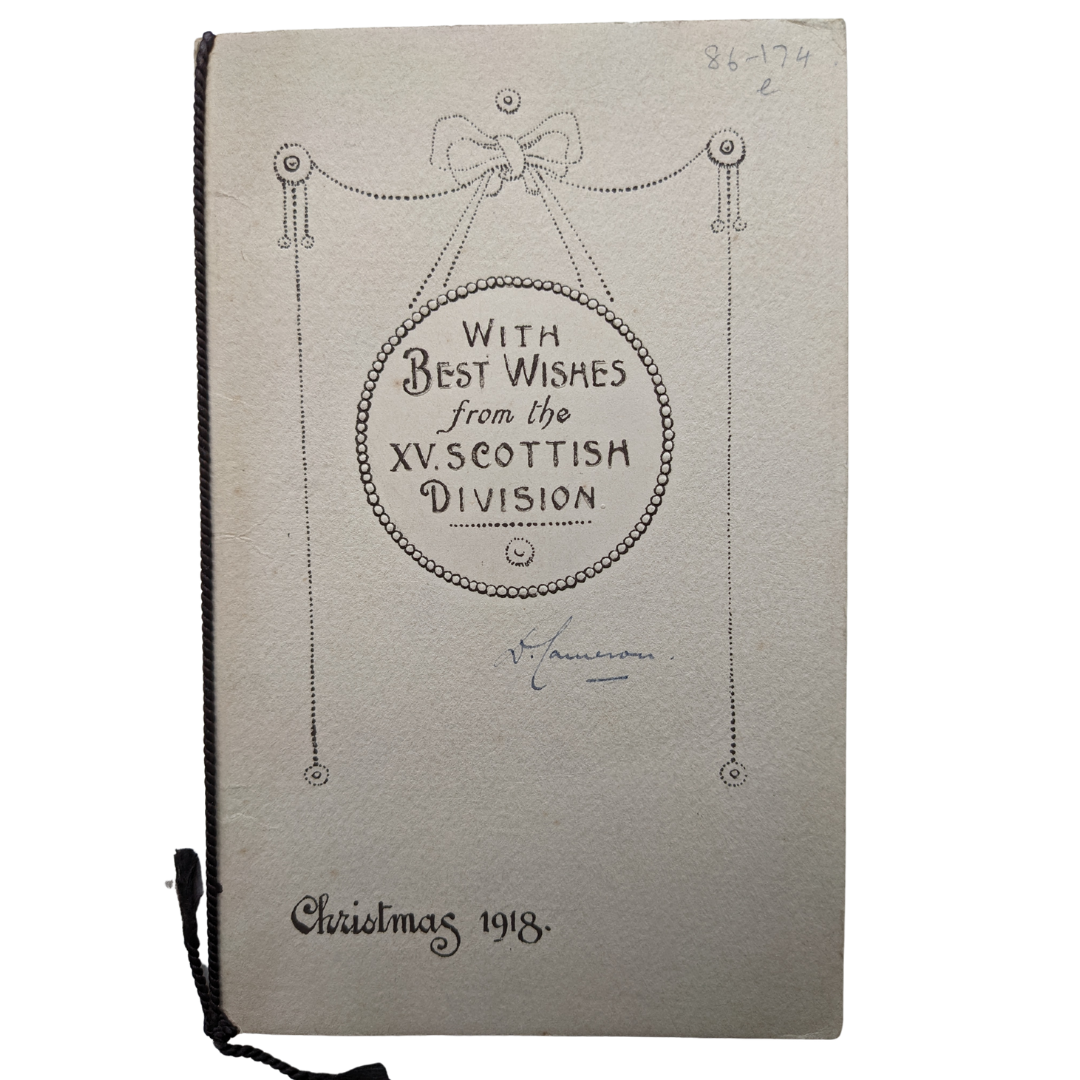 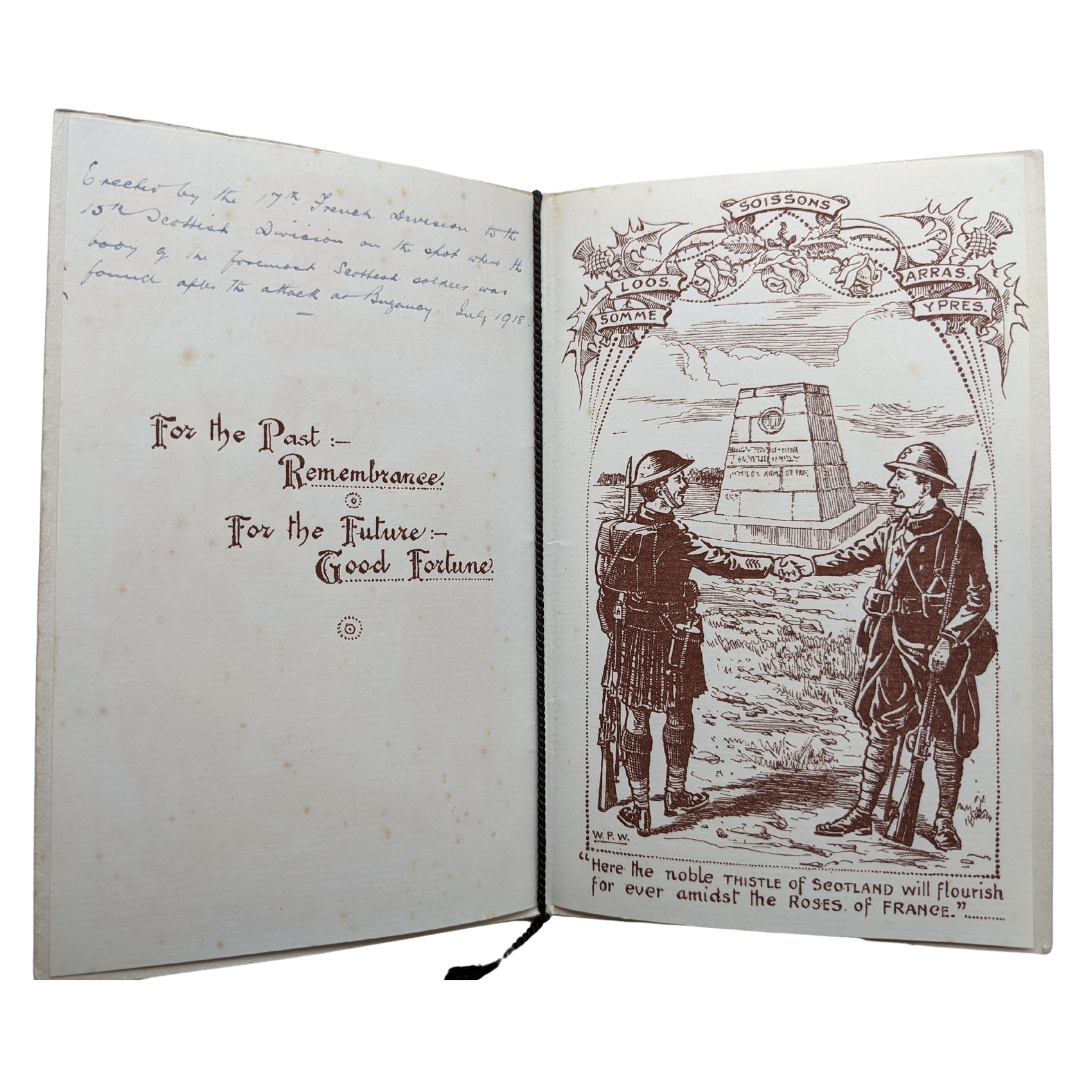 By December 1918 the armistice had been signed and the Christmas cards took a more reflective tone, as illustrated by the XV Scottish Division’s card, signed by Colonel Donald Cameron of Lochiel himself. He had raised the 5th, 6th and 7th Cameron battalions, in response to Lord Kitchener’s recruitment drive of 1915. The 6th and 7th Camerons were two of the 15th (Scottish) Infantry Division’s Highland regiments along with the 8th Seaforths, 9th Black Watch, 11th Argylls, and 12th Highland Light Infantry. The picture inside the card shows a Highland and French soldier shaking hands at the Buzancy memorial above the words “Here the noble thistle of Scotland will flourish forever amidst the roses of France”, a translation of the French inscription on the memorial. Lochiel has added his own handwritten note “Erected by the 17th French Division to the 15th Scottish Division on the spot where the body of the foremost Scottish soldier was found after the attack at Buzancy July 1918”. Today the memorial stands within Buzancy military cemetery and is maintained by the Commonwealth War Graves Commission. 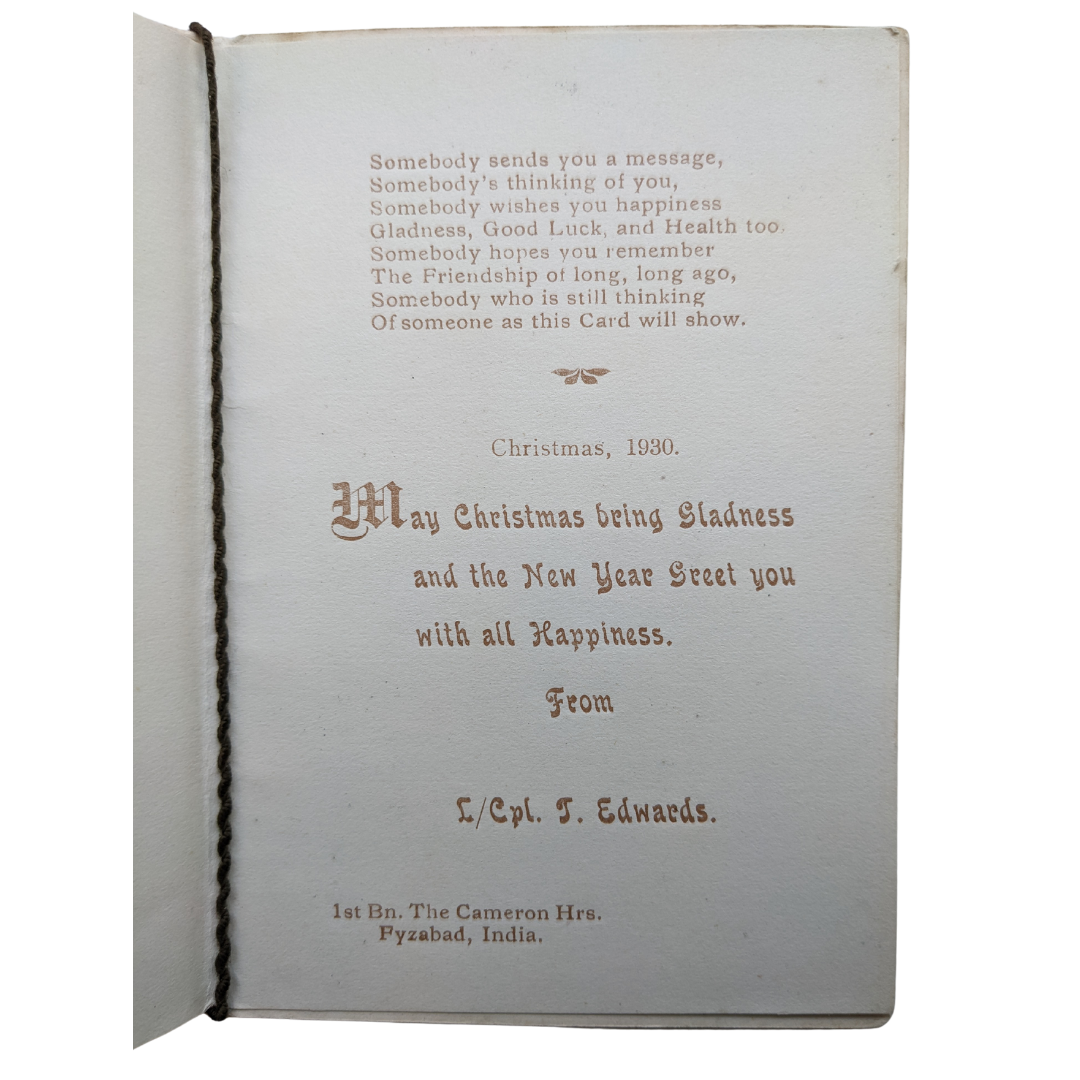 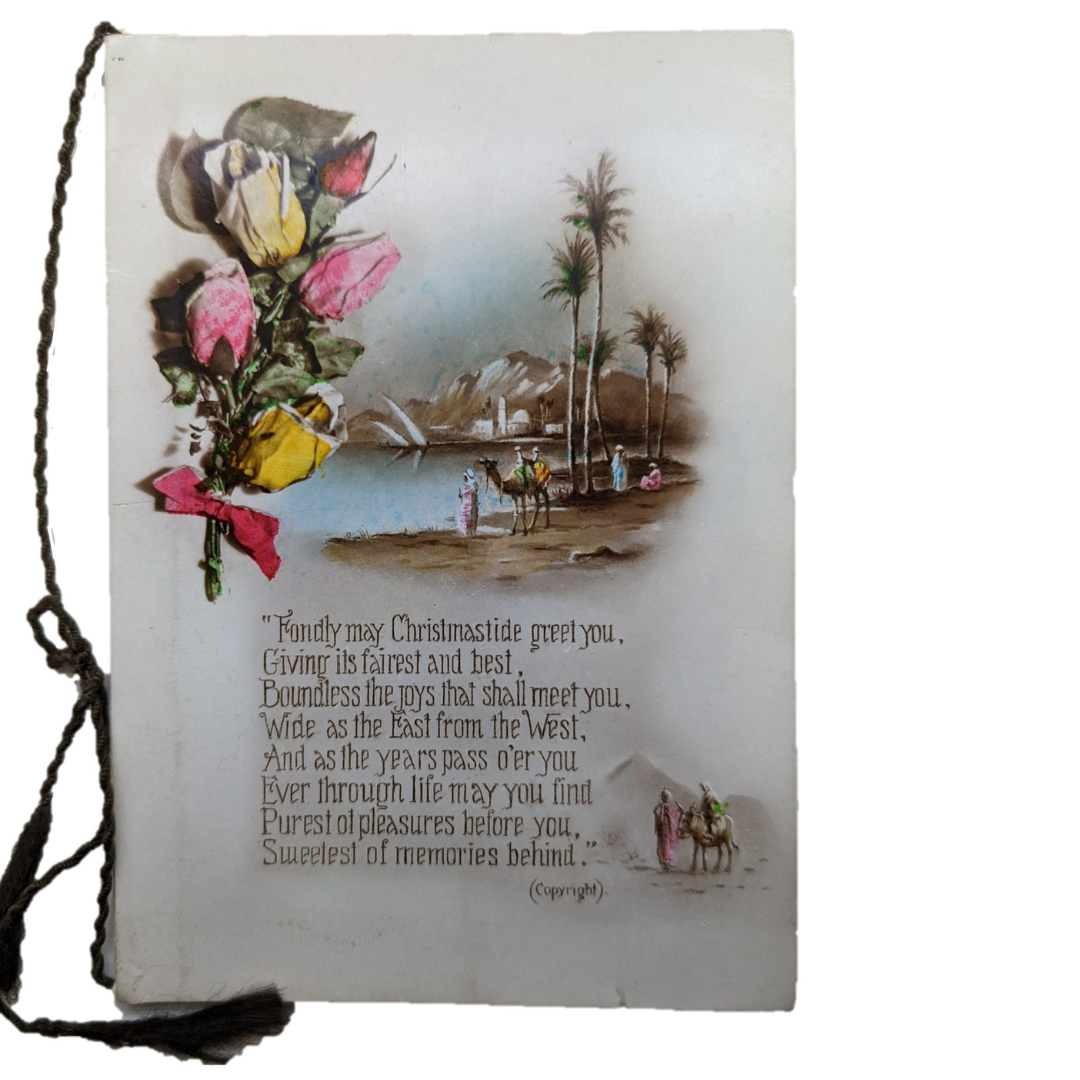 The interwar years saw the Camerons and Seaforths posted to various parts of the Empire and their Christmas cards reflect the geographical spread of these overseas tours. In 1930 the 1st Camerons found themselves in Faizabad (previously Fyzabad) in northern India and the regiment produced a beautifully depicted scene of the Holy Land for that year’s card. It includes a short poem reflecting ‘the best wishes for Christmastide’ below which appears to be Joseph leading Mary on a donkey somewhat incongruously in front of the pyramids. A separate, printed leaf inside the card has a further poem and what seems like a personal greeting from a L/Cpl T Edwards. There is no handwriting in the card so we don’t know whether it was ever sent, but it is interesting that not just officers, but men of all ranks were having high quality cards printed. Thomas Edwards enlisted in August 1926 and went on to have a long and distinguished career, including escaping from Dunkirk in 1940 finally retiring from the army in August 1948, having reached the rank of Regimental Quartermaster Sergeant. 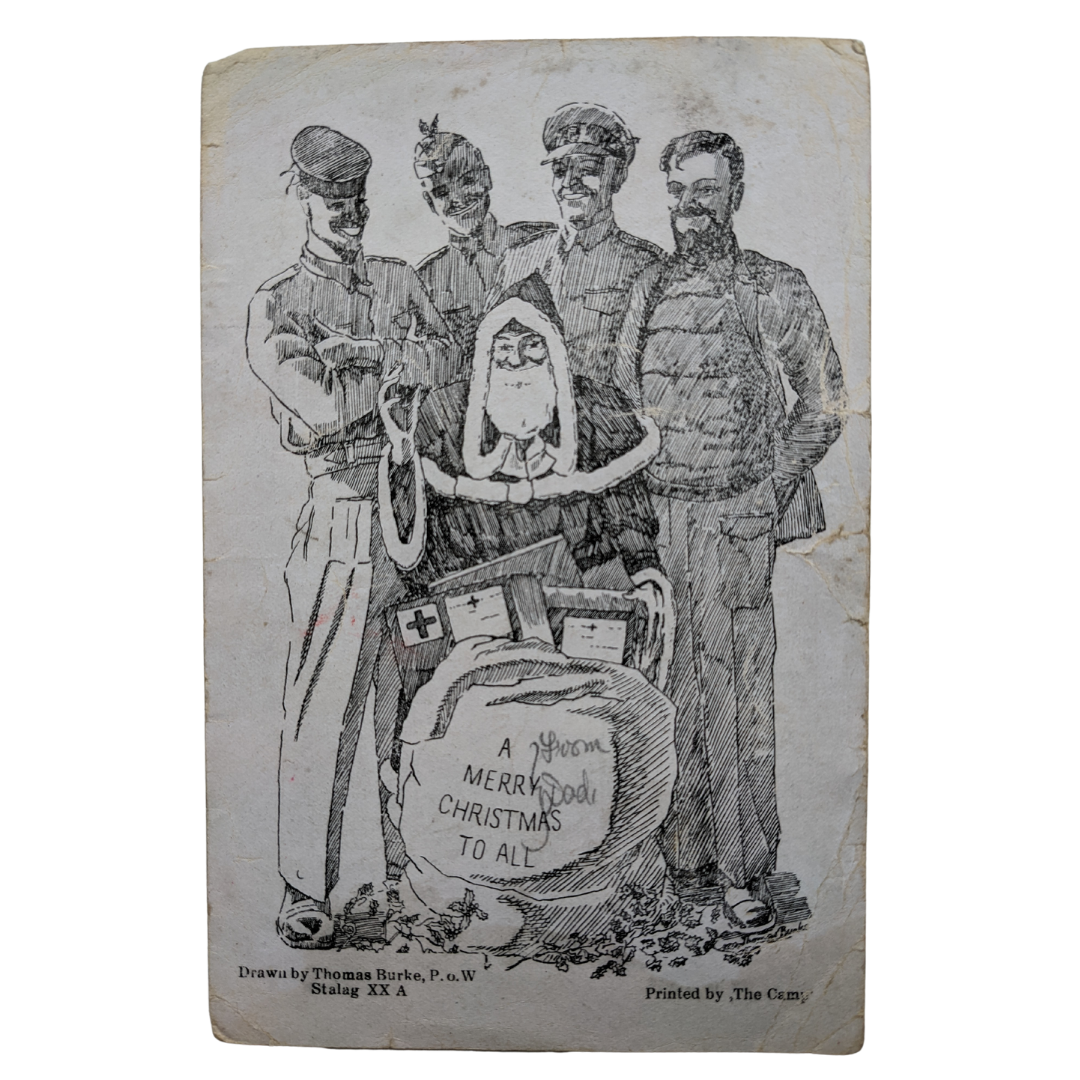 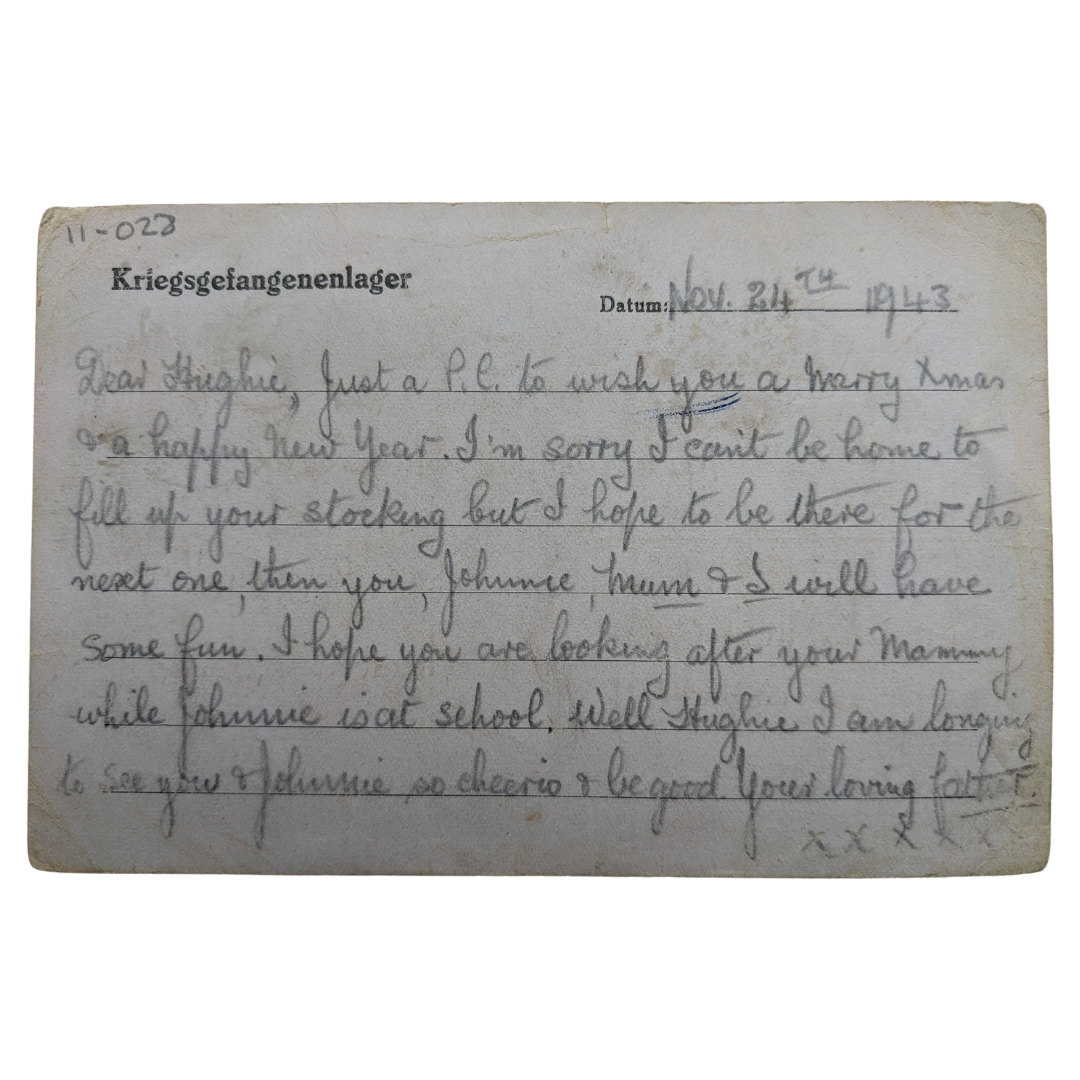 Cards sent during WWII tended to be much plainer and often printed on thin, utility war paper. Most were printed in black and white, like this example sent from a Prisoner of War camp. It shows a group of men representing the Navy, Army, RAF and the merchant seamen standing around a Santa Claus holding a sack of red cross parcels, and was drawn by a Thomas Hughes whilst in Stalag XXA. The card is mentioned in several newspaper reports from January and February 1942. Local papers ranging from the Berwick Advertiser to the Wishaw Press carried reports of local residents receiving the card from a relative in a POW camp. One newspaper noted the “Prominence given in the drawing to Red Cross parcels indicates that these are arriving at their destinations” – perhaps a subtle way to convey intelligence past the camp censor.

The museum copy is accompanied by postcard, dated 24th November 1943, from Sergeant John McEndrick Anderson, 1st Seaforths, to his young son with the following note:

“Dear Hughie, just a P.C. to wish you a Merry Xmas & a happy New Year. I’m sorry I can’t be home to fill up your stocking but I hope to be there for the next one, then you, Johnnie, Mum and I will have some fun. I hope you are looking after your Mammy while Johnnie is at school. Well Hughie I am longing to see you & Johnnie so cheerio & be good. Your loving Father xxxxx”

John Anderson joined the army in 1923 and served with the Seaforths in India. He left the service in 1933 but remained in the reserves and rejoined at the outbreak of WWII. Rising to the rank of Sergeant, he was wounded and taken prisoner at St Valery in June 1940. Anderson was held at Stalag VIIIB, near Lamsdorf, now Lambinowice in South West Poland, so how he came about a card produced in Stalag XXA is not clear. As the Russians advanced westwards in 1945 he was transferred to Stalag 383 in Hohenfels, Bavaria. The camp was liberated on 24th April 1945 and Sergeant Anderson returned home two months later. After the war Anderson worked as a postman in Elgin and remained with the Post Office until his retirement. He died in 1980 aged 78. 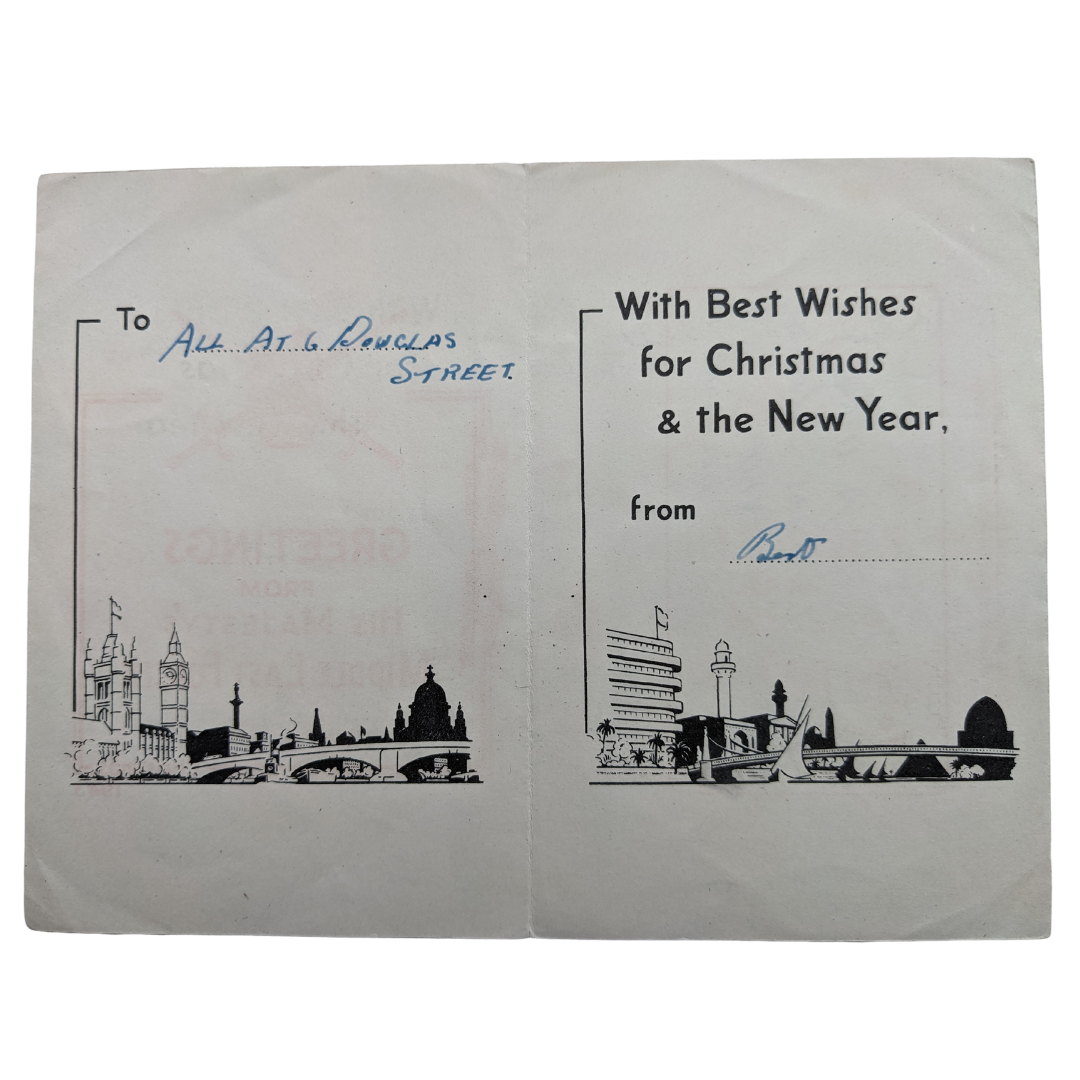 The next card is undated but the cover states HM Forces Middle East. It shows the London and Cairo skyline compared side-by-side in silhouette. The Houses of Parliament, Big Ben, Nelson’s Column and St Pauls Cathedral provide a background to Westminster Bridge, whilst the Cairo drawing shows the Metropolitan Hotel, the Sultan Hassam Mosque, the Citadel, a pyramid and an unidentified bridge over the River Nile. The card is signed from Bert “to all at 6 Douglas Street” and addressed to Mr and Mrs A. McKay, at 6 Douglas Street, Nairn. Several Cameron and Seaforth battalions passed through Egypt during the course of WWII, but with over 50 McKays enlisted in these battalions during that period, it has not been possible to discover any more about ‘Bert’s’ wartime service. 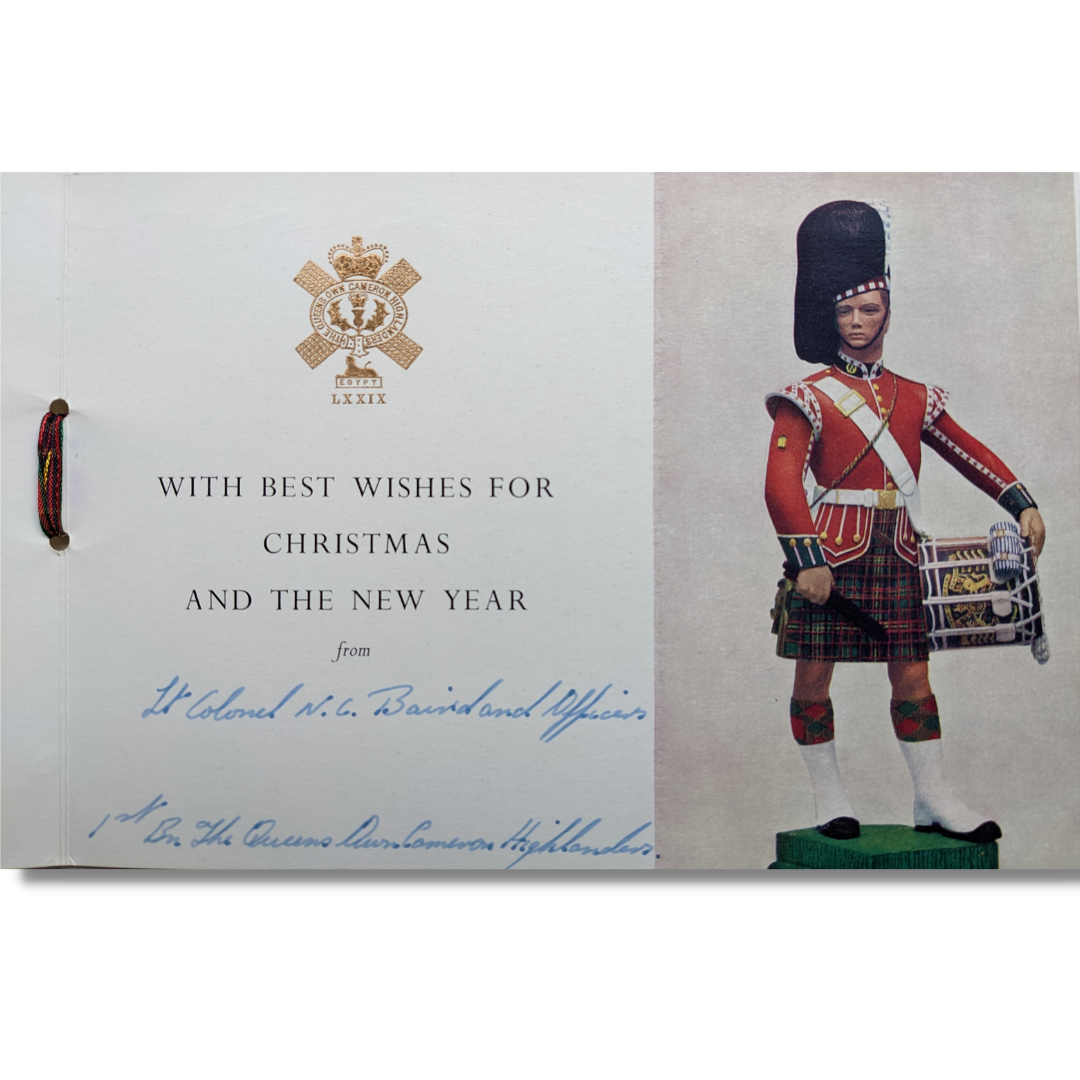 The final and most recent card in the collection dates from December 1960, the last one to be sent by the Queens Own Cameron Highlanders before the amalgamation with the Seaforths in 1961.The card is signed by “Lt. Colonel N.C.Baird and Officers”.

Lieutenant-Colonel Niall Caldecott Baird came from a family steeped in military tradition. His father was General Sir Douglas Baird and his uncle Major P T C Baird was killed in action with the 2nd Camerons in 1915. Niall himself was gazetted to a commission in the Queens Own Cameron Highlanders in August 1937 and had a distinguished career, serving in India, Malaysia, Libya and Korea as well as staff appointments in Inverness and Camberley. He retired from the Army in 1962, having successfully managed the amalgamation of two historic regiments and commanded their first overseas posting to the Far East. In retirement he lived in Elgin where he served on the Morayshire Tourist Board and ran a holiday letting business. He died, in Elgin, on 27th June 1995 aged 77.