The spontaneous ceasfire that broke out along the Western Front between 24th and 26th December 1914 that later became known as ‘The Christmas Truce’ is one of the most famous episodes of WWI. Thousands of letters were sent home in the days after, describing the truce and some of the acts of friendship and kindness shown between the opposing sides. Naturally such stories soon made it into local and national newspapers back home which reported hundreds of first-hand accounts from the men in various front-line battalions.

The Aberdeen Evening Express told a story of Private Colin Munro, of 2nd Seaforth Highlanders, sending his wife “an interesting souvenir of the war in the shape of a postcard bearing the signatures of six German soldiers with whom he fraternised on Christmas Day”. The Strathearn Herald under the headline “Christmastide Fraternising between Seaforths and Germans” carried several stories including one from Sergeant James McCormack who wrote “Our regiment went out and met the Germans half-way and had an exchange of greetings. They gave us cigars for fags, and it was a great joke. A lot of them could speak English, and they were asking us when we going to give it up and go home. They hear nothing but German victories every day; they are never told of defeat”. The Musselburgh News printed an account by Lance Sergeant William Yourston, accompanied by his photograph, in which he described the impromptu burial of a French soldier found in No Mans Land “When all was ready two Seaforths took the head and two Germans the feet and the Frenchman was laid to his last resting place. When the grave had been filled in two candles were lighted and placed on top along with the deceased cap, then a German Red Cross man conducted a short service, while both sides stood with heads uncovered. The scene was one I can never forget”. 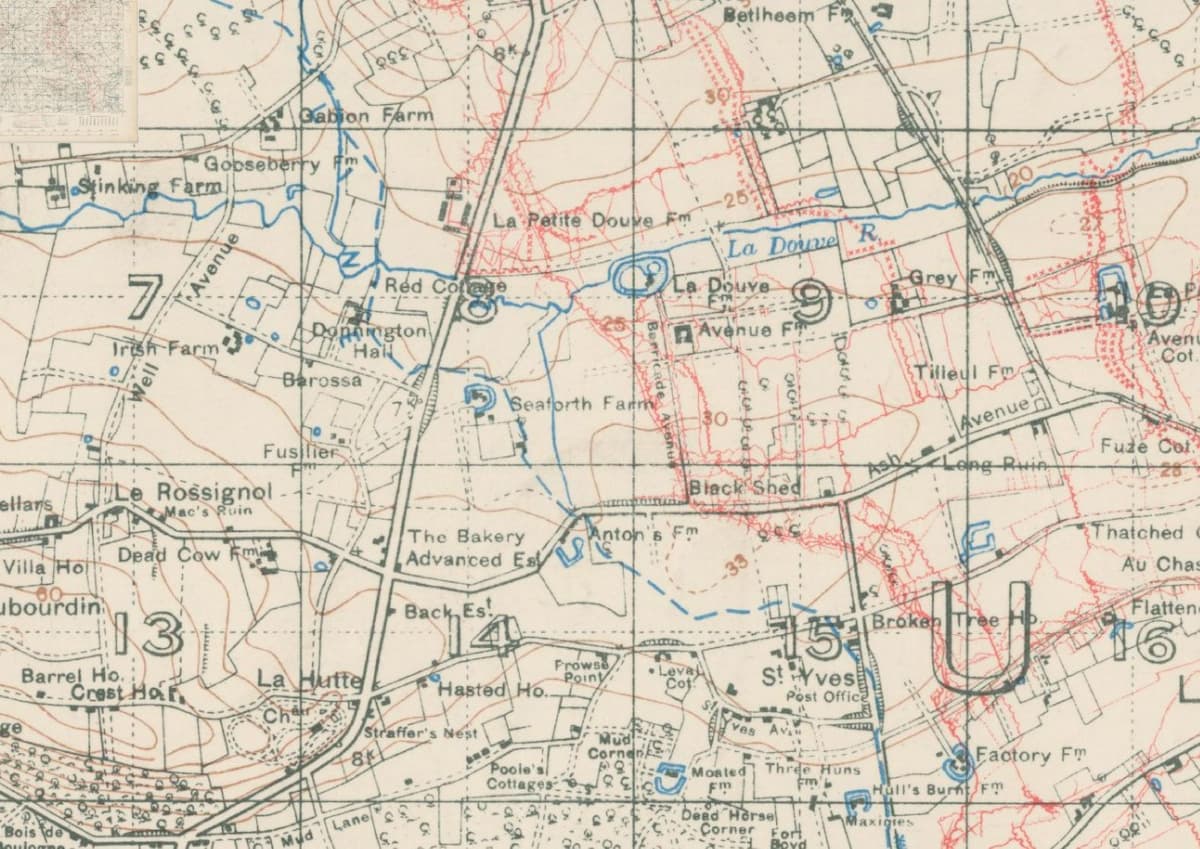 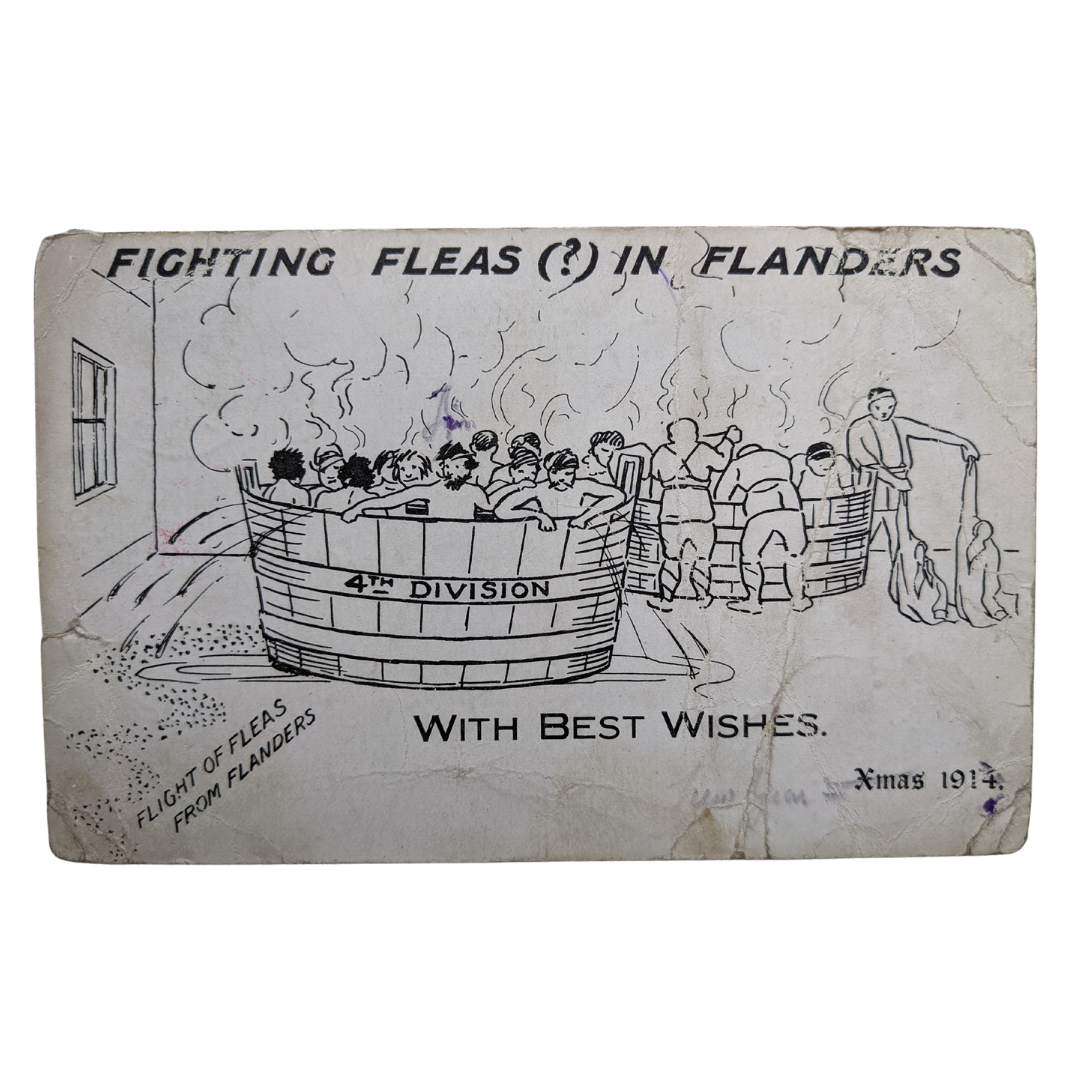 One Seaforth letter that wasn’t published at the time is held in The Highlanders’ Museum archive. It is from Private 8165 James ‘Jim’ Davie to his wife, Christine, known to him as ‘Ciss’, and is dated 28th December 1914. We have reproduced it here, exactly as written, and as you might expect with a hastily scribbled note there is little punctuation and not all the words are legible. What he describes tallies closely with other accounts and he includes several other details about the contents of his parcels and the well-being of some of his ‘pals’ serving alongside.

We are down for our rest again and I have just received your welcome parcel & three letters & papers. You will scarcely believe it but nevertheless it is true we had an extraordinary Christmas on Xmas Eve the Germans who hold Xmas in great style started giving us songs and shouting little bits in English and of course we retaliated and on Xmas day the most funny thing happened, we noticed a white flag going up and then one German getting up on the trench and advanced towards us, and of course we began to do likewise as did more of the Germans and we began to exchange Xmas greetings and jokes, and all sorts they were giving us fags and drinks and a bit of small [?] and showing us photos of their wives and sweethearts and telling us they were fed up with this war, and wanting us to post letters for them as seemingly they are not allowed to write they were saying the Germans were in Warsaw and that the Russians were finished, but of course we listened to all and said nothing and before we parted for our trenches again we had agreed that we would not shoot at each other that day and we kept our word there wasn’t a shot fired that day, but next day our artillery opened as did theirs and so bought to a close the most unheard in any proceedings I believe in the annals of history. They were Saxons it would have been a different take with the Prussians, of course this happened with the Regt in front of us. I couldn’t say if this occurred all along the line but I don’t think it would, so you will see we had not a bad Xmas at all but the funny thing is we are carrying on the same as usual looking for each others blood again. Well dearie it wasn’t so bad as it had been in the trenches this time it was proper Xmas time frost and snow and the ground as hard as nails but of course it will just be the same as usual once the thaw sets in. You were asking me if the stockings would do to cover my knees or if we would be allowed to wear them. I don’t know whether we are allowed or not but we use anything to keep ourselves warm some have drawers others long stockings and all of us boots and puttees, I assure you we don’t look like the peaceful Highlanders you see at home, the stockings you sent are just the sort I wanted I can pull them up at night to keep the cold out.

I got a shock when I saw the contents of the parcel “two puddings struck my eye” I had forgotten all about my favourite and am just dying to get them heated up to find out the taste again. Tell Jim Stall I have not come across the Wiltshire Regt again I think they have gone to some other position so might never see them at all. I had a letter from my Leith pal and he is still in hospital in Manchester and by reading his letter he seemingly never received [?].

I hear Frank Brookes is getting on all right but I couldn’t tell you whether his leg is amputated or not, they know nothing about it here, only that he is getting on all right. Pte Grant and my other pal are still well, Grant’s brother who was wounded over a month ago has joined us again and we make a lively school well Ciss here they are shouting for letters so must close

PS love to all will write tomorrow. 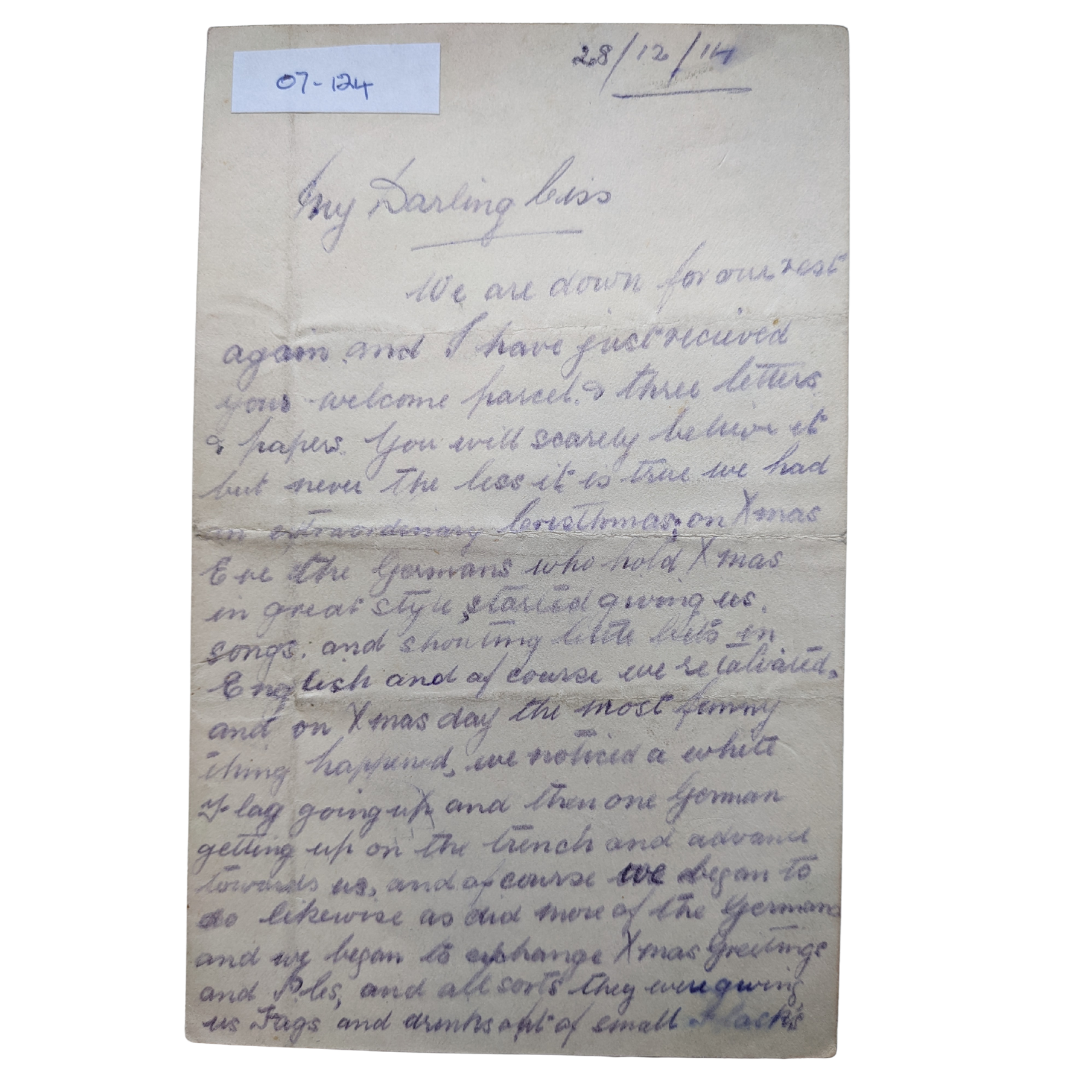 James Davie enlisted with the 2nd Battalion Seaforths in November 1910. When the war broke out on 4th August 1914, the 2nd Seaforth was stationed at Shorncliffe in Kent. The Battalion landed in France on 23rd August as part of 10 Brigade, in the 4th Division of the British Expeditionary Force and on 10th October took part in the capture of the German held village of Meteren in one of the last actions to be fought in open countryside before the trench defence network solidified across north-west France and Belgium. On 23rd December the Battalion relieved the Irish Fusiliers in the Ronarin/Douve trenches, near Neuve-Eglise in Belgium. The Battalion diary reported some snow during the day on Christmas Eve and being very cold and wet underfoot, then:

“Usual sniping & shelling by field guns but not much damage. Germans ceased hostilities after dark & commenced celebrating Xmas by singing & shouting. Some of our men went right up to their trenches & obtained a certain amount of information – we put up a lot of wire during the night. Casualty – 1 man killed.

Not a shot fired & we were able to walk about in the open even after the mist rose. Had some trouble in keeping the Germans away from our lines. Put some more wire out & did a good deal of work by day”. 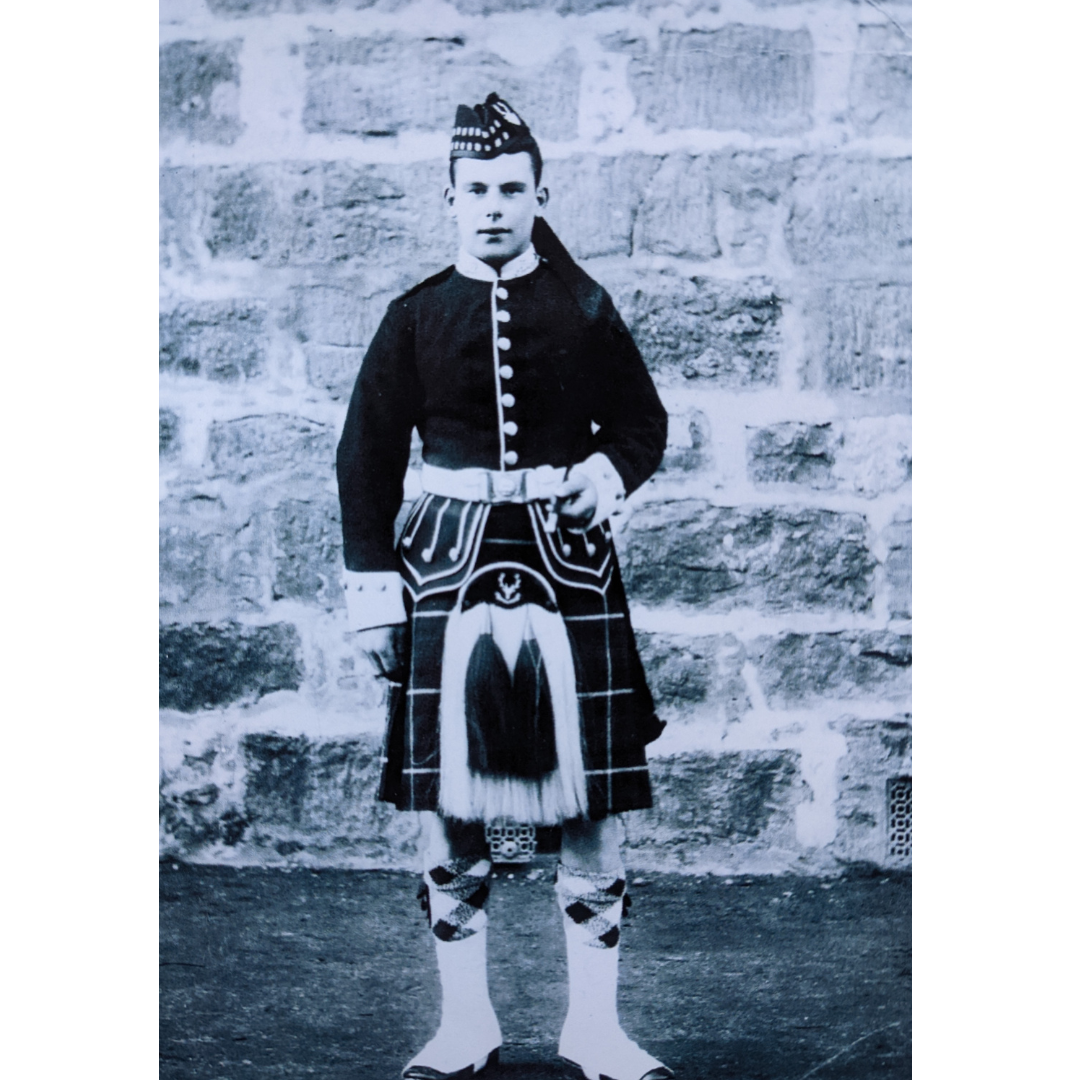 As Private Davie states in his letter, the truce did not last. On 26th the Battalion diary reports some shelling by field guns but no sniping. One man was wounded on 26th and another on 27th. On the evening of 27th the battalion was relieved by the Royal Irish Fusiliers and went in to billets at La Creche. By New Year’s Eve they were back in the trenches.

The first three months of 1915 were spent on a regular rotation between the Douve trenches and reserve in La Creche. During April/May the 2nd Seaforth were heavily engaged in the defence of the Ypres Salient and on the 2nd May the battalion had its first experience of poison gas, from which they lost 24 dead and 324 sick, amongst whom Private Davie was invalided out on 4th May. He survived the war and passed away at Haddington, East Lothian, on 21 January 1961, aged 75. His son, also James Davie, served in the 1st Battalion Seaforths in South-East Asia during WWII.