THE SECOND BOER WAR & THE DIARY OF A SEAFORTH…

Back by popular demand, the diary of Seaforth Private John Winning has been further transcribed; read his story from 11th December 1899 to 31st December. Additional information about Winning has also come to light: prior to serving in South Africa, he was stationed in India and was awarded the India Medal (1895) with Relief of Chitral clasp. He was also involved in the Nile Expedition of 1989 and the Occupation of Crete in 1898 before fighting in the Boer War.

When we laid down that night it was impossible to sleep, for the cold, so we welcomed 12 o’ clock. When we got orders to stand to arms we were told to light our pipes, as no lights had to be shown after we moved off; we were also told to look at our rifles and see that they were in working order, while doing this someone let off a round. This was rather unlucky as it must have let them know that we were coming. It turned so dark that a rope had to be passed from the front to the rear regiment so that we would not loose [sic] one another. We must have been very close to the hill when the Kimberly search light played on us, showing us up to the enemy in grand style. At about 4am daylight was just breaking. The regiments got the order to extend when a red light flashed on the hill, and the next minute a fearful storm of bullets were poured into us. We got the order to fire bayonets and lie down, but some of the front companies charged with a wild cheer but didn’t get far before many of them were mowed down. At this stage, we received many conflicting orders, some being to charge others being to retire, till we did not know what to do. About this time General Wauchope was killed, although we did not know till we had to retire, which we had to do eventually but not for long as we advanced again in long extended lines, 5 paces between each man, to within 80 yards of the position where we laid down as it was impossible to get any closer owing to the heavy fire that was directed on us. Here we lay all day … but it was useless, as the courage of the troops had been fiercely broken at being led into such a death-trap at the commencement. At 5pm we got orders to retire, which we did for about 2 minutes, strong picquets were put out and we were told we were staying here for the night. We were issued with a dram of rum and a couple of biscuits. 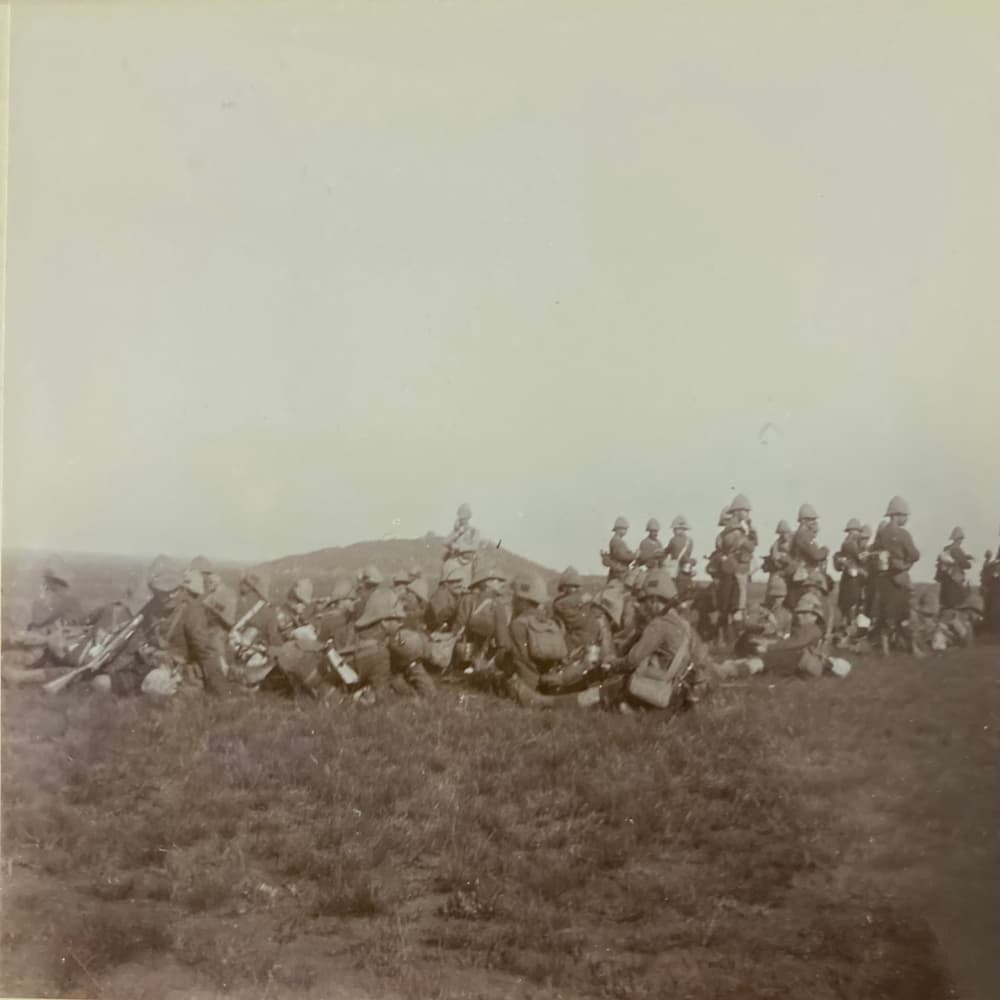 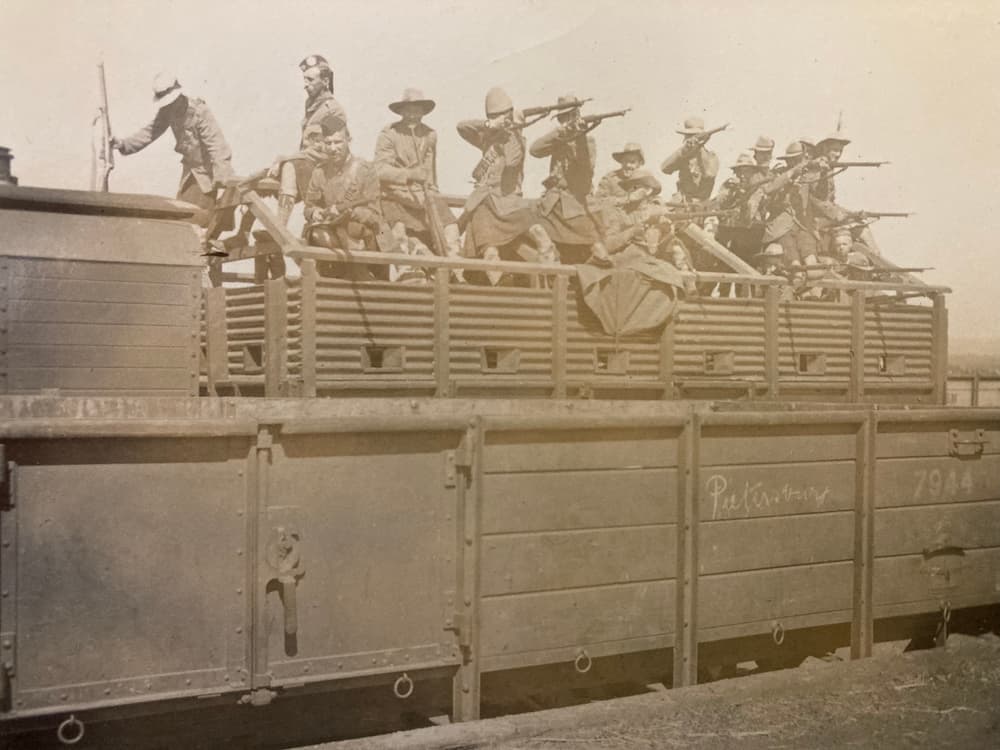 I don’t think I ever slept so well in my life… yesterday we got breakfast, & got orders to march back to the camp at Modder River, which was welcome news as we were not anxious for another repetition of yesterday, so soon. On our arrival in camp, we had roll call, found out of 103 in my company we had 59 missing! There has been a burying party out all day. Both my company officers, were hit. Col Hughes-Hallet of our regiment is in command of the brigade.

I hear that our casualties are 27 killed 18 wounded 15 prisoners, which are not so heavy as was thought, a lot turning up this morning who had been kept with the Guards brigade to cover the guns. They can’t account for Major Mackenzie, as they can neither find his body, the Boers say he his not a prisoner.

I hear General Buller has had a reverse at the Tugela River so that looks bad I am afraid there are not enough troops out here, and the Boer’s strength has been underestimated.

Communication is held with Kimberley every night by means of search lights, ours being in a railway truck at the station and worked by one of the naval sailors.

A Dutch family of 2 men, 3 women & 4 children were brought in by No4 picquet who caught them signalling to the Boers from the window.

This is worse than Egypt for sand storms as we can’t sit down for a meal… it gets covered with sand.  The Boers dropped 2 shells within 300 yards of the Rd to Olifantbeys camp from a long range gun which they have been evading for sometime.

There is a rumour that Lord Methuen is going to try drive an armoured train through to Kimberley by night but all think it will fail as the railway runs through the cutting of the hill that the Boers are occupying.

The heat is intense here & we take every opportunity to go to the river, for a bathe but if we stay out of the water too long we get sun blistered. 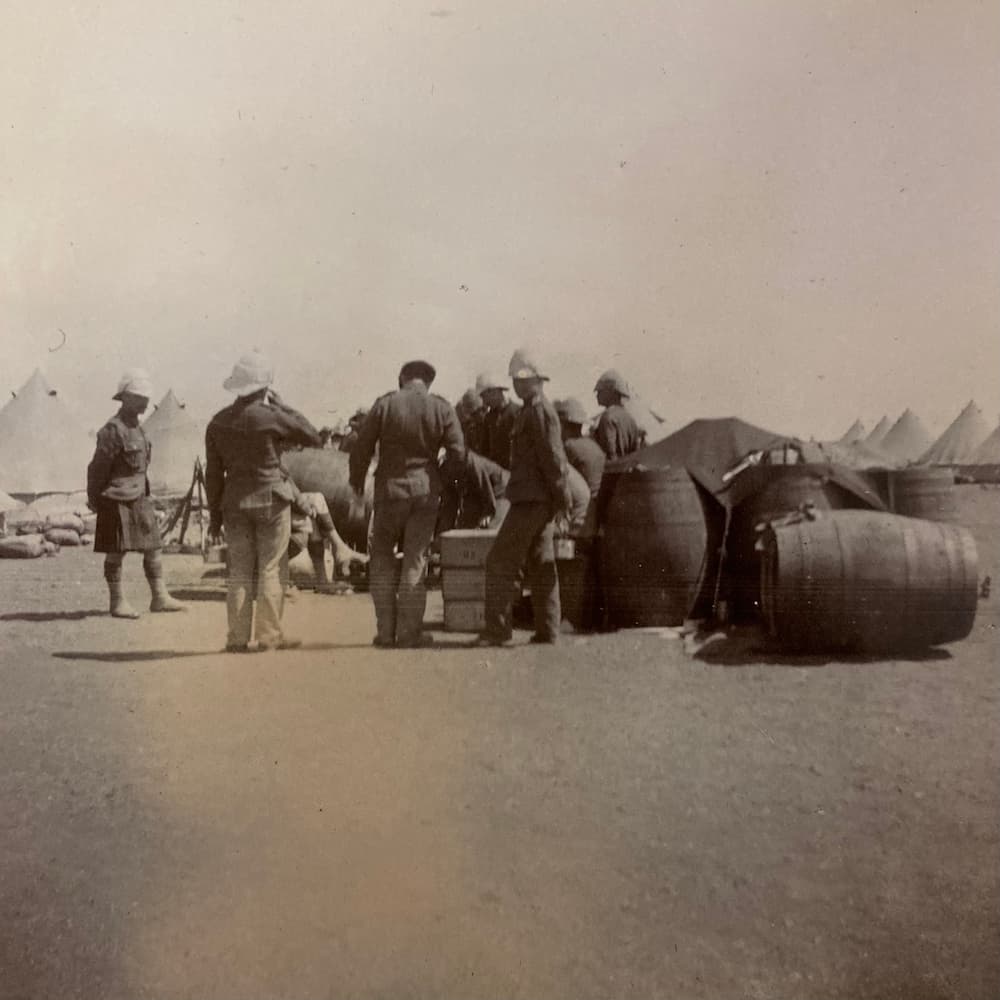 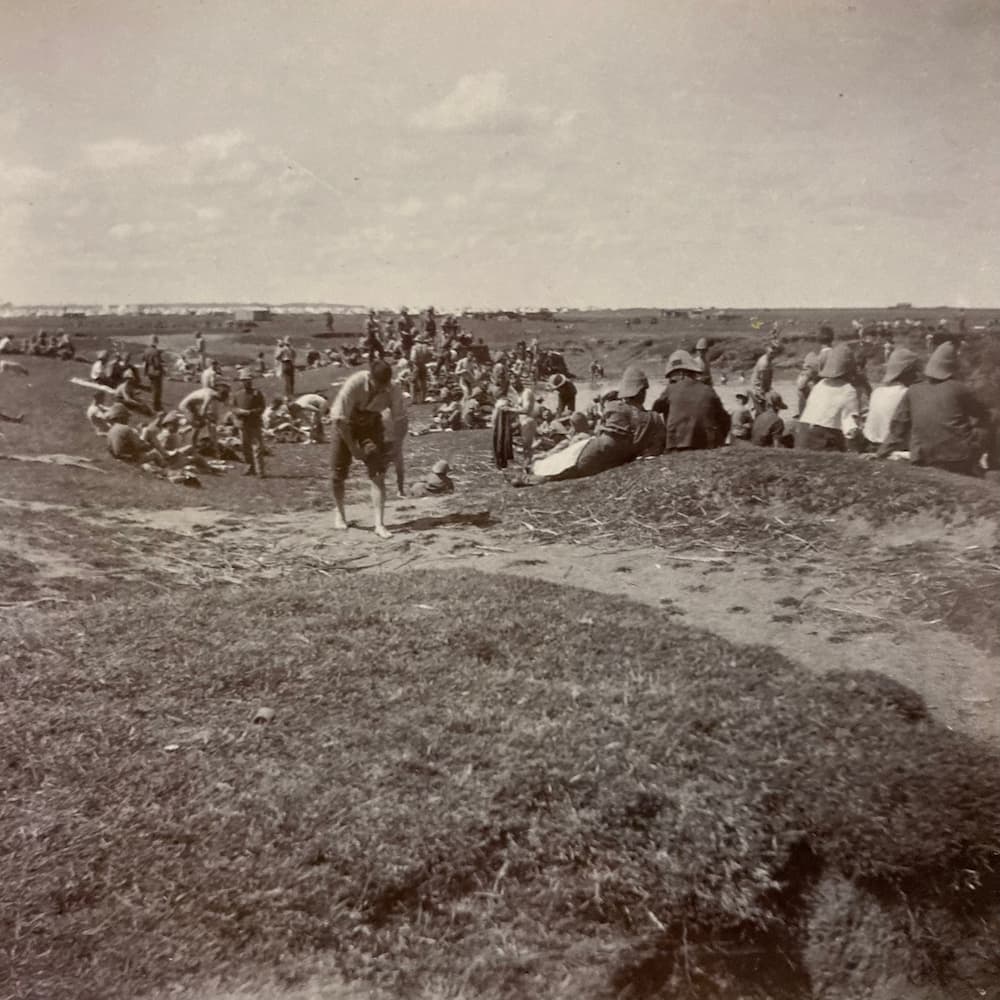 A terrible sand storm is blowing & we can hardly keep our eyes open for it and they say this place is used as a health resort by the exhausted and ill of Bloemfontein & Kimberley.

We are getting rum twice a week with beer in between. The Telegraph Depart: oment are trying experiments with Marconi’s wireless telegraphy.

It has been a very wet Christmas, nothing like what one would expect.

While we were on No2 picquet last night a patrol came round & informed us that the naval guns would open fire, firing 5 rounds of 3 minutes intervals, at 10.30pm. I was on sentry from 10 to 12 pm where at the time stated, one of the guns opened fire, we could see the shell burst on the enemy’s position & immediately they opened a tremendous rifle fire, the hill resembling a sheet of flame. They must have thought we were making another night attack. But the only damage they could have done, was to kill there own picquets, who were out in front.

The Boers had another try to reach camp with there big gun. But failed. There [sic] position is 7 miles away.

Played a football match with the A & S Highlanders being defeated by 2 goals to 1.

I forgot to mention that the railway bridge was blown up by the Boers on returning from Modder River & the engineers are busy creating a new one.

We have just completed the trenches which have been a long & tedious job and are supposedly to get paid at the rate of 1 per hours as it is engineers work.

There is a grand feed for us tomorrow it being New Years day. The Cape Town Highlanders have sent 2 pints of beer per man for the Highland Brigade. but that is not all, as we are getting 2 ozs cheese & ¼ lb of flour per man, & I wonder where we will put it all. 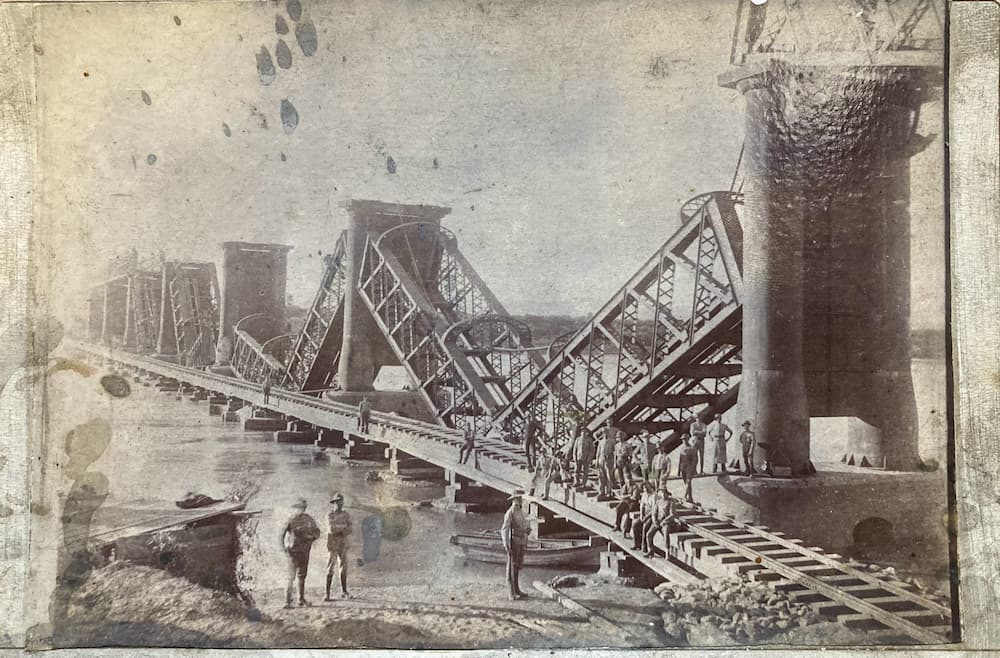