the poet of the 9th Seaforths

Of all the many documents held in The Highlanders’ Museum archives, a collection of poems dating from 1916-1918 and penned under the pseudonym ‘Zem Zem’ are some of the most intriguing. The poems were kept by Captain, later Major, GS Smail MC, who was a company commander in the 9th Seaforth during WWI. After his death in 1982, the poems were donated to the museum by a relative.

Zem Zem is believed to be the pseudonym of Captain JJH Ferguson MC RAMC, who for a short period in 1916 was the Medical Officer of the 9th (Pioneers) Battalion Seaforth Highlanders. He was a prolific writer of sometimes scurrilous verse, the target of his wit often being the 9th Battalion’s Commanding Officer, Lt.Colonel Timothy Fetherstonhaugh DSO, a pre-war regular soldier whose uncompromising standards seemed incomprehensible to the erstwhile medical superintendent and temporary soldier.

When not poking fun at his Commanding Officer, Zem Zem’s poems are an affectionately observed commentary on the men of 9th Seaforths, life in the trenches, the hardships faced and the destruction wrought upon the fields and towns of Northern France. In this series of blogs, we will tell the story of the 9th Seaforths during WWI as seen through the eyes of Zem Zem, his poems and his clashes with ‘Tiger Tim’. 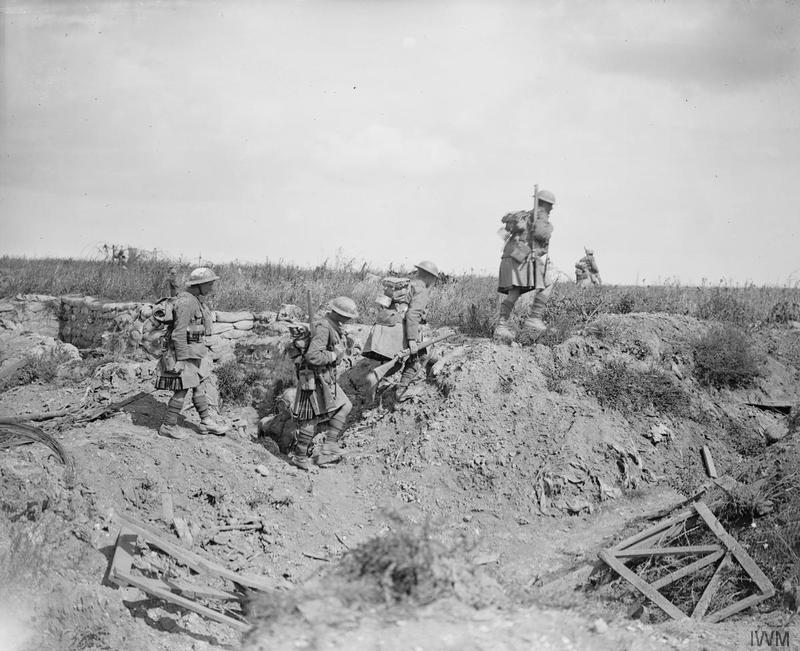 John James Harrower Ferguson was born on 7th September 1881 at Newburgh in Fife. His father, James Ferguson, worked as an Officer of the Receiver or Inland Revenue as it is known today. A brother, Bertram, was born in 1886 whilst the family were living in Aberfeldy and by 1891 the family had moved to Angus where John attended Brechin High school. In 1900 he moved to Edinburgh to study medicine at the University, where he was awarded the Aitken Carlyle bursary for Anatomy after his first year and elected President of the Student Council in his third. He graduated in 1906 and completed post-graduate studies at University College London specialising in mental illness, before taking up the post of Medical Assistant at the Perth and Kinross Asylum near Cupar, Fife, in May 1907. At that time the asylum, also known as Stratheden, cared for 655 patients and employed over 100 staff. Today Stratheden is a community hospital, still caring for patients with mental health issues.

He was clearly a very popular doctor, both socially and professionally. He opened the batting for the hospital cricket team, and was a leading light in the dramatic society, helping to stage the annual Christmas dance and entertainment for the staff and patients. The farce Chiselling presented in December 1912, in which he played Trotter, a manservant, was described as ‘screamingly funny’ by the Dundee Courier and in the following year’s production A Cure for the Fidgits the cast, including Dr Ferguson, ‘performed their respective parts splendidly’.

In November 1914 he was promoted to Medical Superintendent following the retirement of the incumbent due to ill health. Quoting the Chairman of the District Board of Control, the St Andrews Citizen noted that “Dr Ferguson had given great satisfaction, and had done very good work particularly during the nine months in 1910 that he had been left in full charge of the Asylum in the absence, through illness, of Dr Turnbull”. The Board went on to note that the hospital had received very good reports from His Majesty’s Commissioners and Dr Ferguson deserved his share of the credit for that.

For reasons we do not know after just six months in his new position, Dr Ferguson resigned and joined the Royal Army Medical Corps (RAMC) at the rank of Lieutenant. The war had been raging for nine months by this point, and was proving to be far more bloody and protracted affair than the optimists had predicted. A huge recruitment drive was taking place and perhaps Dr Ferguson was swayed by Lord Kitchener extolling “Your Country Needs You”. In any event, after six months officer training, in December 1915 he was posted to France to join the 9th Seaforths as their Medical Officer, and not long after he wrote his first poem To Scotland in Flanders.

As with most of the poems in the collection, this one is neatly typed, suggesting this was done at a later date, possibly from a handwritten original. Like all the others it is unsigned apart from the nome de plume ‘Zem Zem’. Why the cryptic name and where did it come from? Well, it was not unusual to write under a pseudonym, indeed many regular columnists continue the practice today, and given the subject and tone of some of the poems, a cloak of anonymity would have been wise.

The name Zem Zem is an anglicised form of the Zam Zam well in Mecca. According to tradition, the well is a miraculous source of water that appeared for Ismail, son of Abraham, when he was left alone in the desert with his mother. The water, which flows to this day, is believed to have healing properties and to brighten the vision to those who drink it. In December 1915, the British press featured a report about the German traveller and explorer, Karl Neufeld, who had recently returned from the Middle East where he had been sent to stir up anti-British sentiment amongst the Arabian tribes. What particularly irked the press about Neufeld’s activities was that 27 years earlier he had been captured in Sudan, imprisoned and badly abused by the Mahdi, his 10 years in captivity only ending in 1898 after relief by a British expedition, ironically lead by Lord Kitchener. The papers were aghast at this seemingly lack of gratitude, and noted that on his return from Arabia he had presented the German Field Marshall Von Hindenburg a flask of water to relieve his gout. The Dundee Courier sniffily reporting that “The ‘miraculous water’ is probably water from the famous well Zem-Zem, at Mecca, held locally to be of miraculous origin. Many virtues are claimed for it, though the cure of gout is a new one… Undoubted facts about Zem-Zem water is that is nauseous to the taste and heavy to the digestion…It seems doubtful, therefore, whether Marshall von Hindenburg will take kindly to the remedy”.

Perhaps the newly arrived Lieutenant Ferguson, reading the story in the newspaper, thought that enlightened vision with a slightly acerbic taste was a good description of his poetry, and adopted the name accordingly?

By Craig Durham, volunteer at The Highlanders’ Museum

READ: TO SCOTLAND IN FLANDERS